Offseason, when arts reporters don't have anything to write about either

(More postings this weekend.)
Posted by JSU at 6:48 AM No comments:

One of my readers provided, via email, this response to my question on televising the Cav excerpt:

I think the reason they had the Cavalleria part in the Gala, and left in for the telecast, was that was the one opera Volpe knew as a child, having to sit there and turn over his grandmother's 78 records. It's been told to be the only opera recording she had, and he was the only one who had that "job."

So, makes sense, right? Part of the Volpe legend.

Yes, that makes perfect sense. Thanks!
Posted by JSU at 11:22 PM No comments: 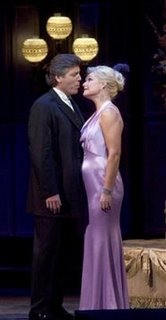 Somehow the intervention of TV broadcast has here a levelling effect, to some extent lumping decent and great, huge and muted, together into indifferentiable mush. Is it the medium? Editors' intervention and equalization? Or just my inability to concentrate on a repeatable broadcast of something I've already seen... Perhaps one who wasn't there can make more of this version.

On the other hand, the broadcast reveals quite well, e.g., the really unhappy caution of Ben Heppner's Prize Song (why did they leave this in?), and how much of Kiri te Kanawa's voice is and isn't left (a surprising amount of the former -- Thomas Allen bluffed his way through this season's full Cosi run with less).

Editors' snips left (in order) Dwayne Croft, Denyce Graves, Stephanie Blythe, Sam Ramey, Roberto Alagna, and Dolora Zajick entirely on the cutting-room floor, while significantly chopped were the Met Chorus (the Tannhäuser selection reduced to intro title music), Deborah Voigt and Placido Domingo (one piece each), and Susan Graham, whose cutesy Ben Moore song had its entire middle section cut out. (Were there other in-aria snips? I didn't think to listen for them until very late.) Salvatore Licitra arranged his travel plans poorly, while Ruth Ann Swenson had to drop out of the afternoon's matinee (and ABT's opening night the next Monday) due to allergy: both, accordingly, were scratched before the original evening's start.

Domingo might be the ideal gala singer. He retains a surprising quotient of vocal glamour and -- for five or ten minutes of an evening -- can deliver it easily, ultra-professionally, on command. What a respecter of the gala form! One who wouldn't think of disrupting it with something less reassuring than high-wattage star power -- e.g., serious dramatic commitment. But that sounds snarkier than I intend.

Actually Domingo's way seemed ideal for the evening until Natalie Dessay soon after raised the stakes considerably. And not just by her performance (for which I'll try to figure out youtube, if another hasn't already uploaded the thing): all applause was neatly trimmed for telecast, but her ovation was thunderous, and so persistent that she had to be brought back for another bow. A challenge, then, for those after.

Kiri's solo bit -- Korngold's "Glück, das mir verblieb," arranged so she sings both parts -- was, appropriately enough, one of the few valedictory selections of the event. Much more of a farewell for her, I felt, than the relatively anticlimactic Capriccio that saw her out in '98. (I was present for that too, incidentally -- it was the very broadcast that Maury remembers.)

Hvorostovsky and Pape in Don Carlo(s): Coming soon, again. Get your tickets now.

Probably the most bizarre editing choice was cutting Dolora Zajick's remarkable (yes, she can lighten her voice!) "O mon Fernand" and leaving in, e.g., the interminable Cav bit. Is the latter piece generally beloved with an intensity of which I'm unaware? Or is there some sort of odd anti-mezzo bias that also axed Blythe? Odd.

Domingo's fraudulent stick-waving got rather more airtime than the real conductors'. Hah. But when Levine's away...

*     *     *
What was it all about, then? A bunch of things, Volpe only one. Maybe too many, or too few. But it did add up to something. Viewing it left the same basic impression I got on the day: How fortunate we are. How fortunate he was. Why carp?
Posted by JSU at 6:15 AM 3 comments: