A correspondent sent me this review of Saturday's matinee Macbeth:

I won Met lotto for the matinee performance this afternoon and it's pretty good. Maybe the best cast ever for this particular opera production. Hampson is better in this part than Alvarez and Lucic. Has more lyrical and musical delivery than his predecessors and he played Macbeth as a politician that's out of his depth, which I think is right, (as opposed to the way most actors like to do that part which is as "Dr. Evil".)

Nadja Michael is an ideal Lady Macbeth -- loud, high, not afraid to do those ugly chest notes. She's a natural Ice Queen and loves it.

Groissbeck was a very good and sensitive Banquo. Pittas made the most of his part. Also, clarinet sounded good, will check out who it is when I go to the Traviata dress in a couple of weeks.

This afternoon was Hampson's 25th anniversary singing at the Met and Gelb gave him the original portrait of T.H. as Count that hung in the Ponelle production of Figaro. 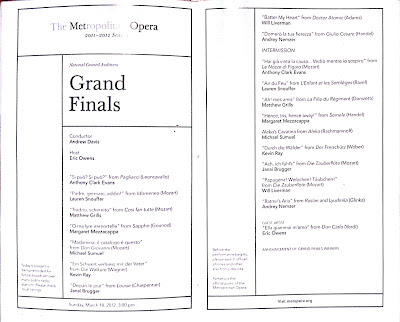 After a year of leaving the pleasure to correspondents, I attended Sunday's edition of the Met's annual 30-and-below singers' competition myself. The program is above, comments follow below.

Anthony Clark Evans (27, baritone, Kentucky) has a coherent and ingratiating baritone voice that could be used to good effect. I found his actual use thereof, however, less than engaging all around. A project.

Lauren Snouffer (23, soprano, Texas) was a terrific contrast to Evans, making much more lively work of her selections -- even the introductory recit of the Mozart. Unfortunately it occurred to me rather early on that hers is the exact sort of voice that doesn't win Met Finals. Everything works, is pleasant to hear, and includes even a real trill... it's just not a big/juicy tone, but a more idiosyncratic instrument of the type that Gelb seems to hire from Eastern Europe and not America.

Did Matthew Grills (25, tenor, Connecticut) win because he nailed "Ah! mes amis"? Oh, probably. But it was the best version I've heard at one of these audition events. Besides the Cs he has a nice sense of phrase, a pleasant lyric tenor sound (though grainier than, say, Polenzani, that's not really a fair comparison for most), and good comfort on stage. Good prospect.

Margaret Mezzacappa (24, mezzo, Ohio) has a spaciously-scaled instrument, the blessing of AVA, and well-schooled ideas on phrasing and the like. Unfortunately at this point she also has a broader and more pronounced vibrato than many will be comfortable hearing -- including me. Her slow Gounod selection really brought this issue to the fore, and though the Handel made a better impression, her current sound is her current sound.

Michael Sumuel (26, bass-baritone, Texas) had not only a more bassy but a more defined and impressively outlined sound than the other men... and yet it somehow didn't make the impact one felt it should have. If it fills out, watch out.

Heldentenor Kevin Ray (26, New York) -- wait, a heldentenor!? Yes, he really sang Siegmund's sword bit and Max's aria -- and not badly, either. Putting him after Sumuel did him no favors, for though Ray has an unsurprisingly growly heldentenor timbre, he doesn't have the full chest underpinnings one might expect as accompaniment. That said, given that next season's Siegmunds are being sung by a guy (Simon O'Neill) who actually sounded pretty bad at his Met Finals appearance (yes, I understand he's improved since), Ray is in a pretty good place at 26.

Janai Brugger (29, soprano, Illinois), to put it simply, has exactly the sort of voice that does win Met Council Finals. School of Fleming (in the best way) lyric soprano instrument with star written all over it. Most promising (perhaps only to my idiosyncratic ear, though) for her big-house future were the hints of underlying muscle in her (nevertheless) lovely high note production.

Will Liverman (23, baritone, Virginia) used his lyric baritone well, though it did seem pushed to its limits at the climaxes of the Adams. In fact, much of the time he had it seeming more impressive than Evans' and Sumuel's instruments... which I'm pretty sure is not actually the case.

Andrey Nemzer (29, countertenor, Russia) was quite impressive... for a countertenor. Most interesting to me was his not-infrequent interjection of "chest tones" (that is, I believe, non-falsetto sounds) to liven up the inherently limited color palette of the countertenor voice. I do think that the two-aria format is rather biased in favor of countertenors, though, as that's about the point where the fatigue of the aforementioned limited sound-color sets in.

The question, I suppose, is about the future, and I doubt any of the participants -- official "winners" or no -- will lack for opportunities. How big will Brugger get? Well, the recent past had two similarly spectacular lyric-soprano sonic successes: Latonia Moore (2000) and Susanna Phillips (2005). Moore has had a nice career since that win, but real stardom has not -- for whatever reason (perhaps a move into heavier roles?) -- yet been her lot. Had I known about her surprise Met debut as Aida, I'd certainly have seen it myself, but Maury does offer a thorough report... perhaps the broadcast is to be a launching pad. Phillips, meanwhile, has stuck to the lyric repertoire, won the 2010 Beverly Sills award (the Met stamp of approval) and is the Met's only Donna Anna next season. (She's also still only about a year older than Brugger, so my sense that the Met took a while to hire her -- she debuted three-and-a-half years ago -- is probably off.) It's a much more crowded field than the dramatic coloratura specialty in which Angela Meade could go from Finals to cover debut to lead in nearly-successive seasons, though, so those wanting to hear more Brugger may have to be patient.
Posted by JSU at 2:39 AM 2 comments:

Metropolitan Opera
Macbeth (T/SM), Elisir (W/SE)
Slow week at the Met as the house readies its new Manon and next month's full Ring(s).

A less drab week than has been recently on offer.

Damrau, Florez, Kwiecien, and Corbelli continue their month of Elisir, while Finley and Terfel's Don Giovanni and Mussorgsky's apology for old Russian death-cult fundamentalism both wrap up this week. The nominal novelty is German soprano Nadja Michael's debut in Macbeth (with Thomas Hampson), but most longtime Met-watchers will perhaps more savor Sunday's Council Finals and its chance to see future stars (or lesser lights) in a rather earlier stage of development.

New York City Opera:
Cosi Fan Tutte (Sunday 1:30pm)
No longer at Lincoln Center, NYCO appears somewhat nearby at the Gerald Lynch Theater (59th between 10th and 11th). This Cosi runs for a week in a Christopher Alden production.