Off-topic diva Veronika Part danced her last leads at ABT this season (she is scheduled for a large supporting part -- Myrtha -- in two later performances of Giselle) in two terrific and well-received performances of La Bayadere. As a commenter here noted, however, word on the internet (also dutifully repeated in the papers) is that she may be staying after all. In what capacity? We'll see.
*
Last week seems to have woken a number of bloggers (see sidebar links) from slumber, not least Sieglinde at Balcony Box who returns hosting Brad Wilber's invaluable Met Futures compilation. (And bearing belated praise for Johan Botha's remarkable Otello.) ACB, on the other hand, appears explaining a new increase in happy silence.
*
Subscribers are now running into the new pre-season exchange policy at the Met, which involves a $5 charge per ticket for everyone. The donor base is not, I think, happy.
Posted by JSU at 7:58 PM No comments:

Although (his terrific Pelleas the next season notwithstanding) essentially persona non grata at the Met since his impolitic press row with Cecilia Bartoli a decade ago, director Jonathan Miller has continued to have a presence in New York, directing shows at BAM and other venues around the city. The latest is a BAM staging of Stendhal's second-favorite opera, Cimarosa's "Il Matrimonio Segreto". It opened the last Wednesday of May, with some attendant promotion.

One such tidbit was a public interview and Q&A before the next day's show. Miller's talk there was consonant with both past and present press, and perhaps deserves consideration.

Miller, like director-turned-administrator Peter Mussbach (recently deposed from Berlin's State Opera), began as a doctor focused on the brain -- though Miller seems to have looked more to hardware, Mussbach to software. By his own account, directing was a fortuitous continuation of what he'd begun with medical studies and neurological research: the study of human behavior. He describes (his?) art as giving attention to the neglected details of ordinary life. It is an appealing -- if somewhat early-20th-century-flavored -- prospect he offers, art in accord with science. But what sort of art?

It's a jealous one, for sure. His dispute with Bartoli seems to have been fairly characteristic: Miller has no time for the ways of such stars, whom he continues to dismiss as "Jurassic Park singers". It's true that big names may (not least because they can) be difficult colleagues, perhaps undirectable even if cooperative. But Miller does opera a disservice by dismissing and even denigrating the very real dimension that star power adds to performance.

Similarly, though Miller pointedly attacks continental notions of "Regietheater", he has his own strong and fairly exclusive ideas of what works are "really about". The Magic Flute, for example, he pronounces with a debunker's zest to be about the Enlightenment -- and not just in general terms but as a specific attack on Empress Maria Theresa -- and thus not at all about the charming and showy elements that distinguish the current Met version. Der Rosenkavalier he judges to be falsely set during this same Empress' reign, and really about the impending doom of the Great War (so he moved it "back" to the time of its creation). And he explains, in part, his relatively short track record in directing the romantic classics to his distaste for so many of them having been set in far-back historical locales about which the composers knew nothing.

Glamour, play, suggestive half-mythical vistas: Miller's rejections of these and insistence on the primacy of the ordinary leave him with a rather austere form of realism. It's a thing quite in accord with his scientific past and upbringing (his father was also a physician), the analytic philosophy he professes to admire, and the postwar England in which he grew up -- and it's inoculated him against the more anti-human trends in directorial fashion. But this sort of jealous realism also leaves much out. The exotic pageantry of Magic Flute and the anachronistic Vienna of Der Rosenkavalier are not unfortunate detrius, no more than is the very fictionality of opera -- of art itself. It is, if anything, the other way around: if fine-grained realism has become more and more important as a means of onstage effect, it has always -- as a latecomer -- had to share billing with less enlightened vocabularies, near-atavistic elements which remind us of the first protagonist/subjects' divinity and the thread thereof persisting in their descendants. (As for realism as an end, its run in opera was very short indeed.)

*     *     *
Whether from theory or particular happenstance, the actual production -- a followup to Miller's 1992 staging of the same piece at Glimmerglass -- as performed at BAM wasn't wholly successful. Singing and playing were best: though tenor Chad A. Johnson had difficulty with softer singing, the rest of the mostly-young cast showed appealing and well-trained voices in their parts, while Paul Goodwin led players from the Brooklyn Philharmonic in a mostly (but not overbearingly) sprightly account of Cimarosa's Rossini-meets-Mozart writing. Theater, on the other hand, was less well served. Miller's conception (and the colloquial supertitles) strongly played up the cruel-humiliating buffo elements, equipping each of the singers (and two silent servants) with recognizable tics of character (and, in the English character's case, accent). The more veteran performers -- basses Conal Coad (Geronimo, the father) and Jonathan Best (Count Robinson) -- did well under this regime, but the others -- particularly Heidi Stober as the put-upon Carolina -- seemed limited and overdirected.

Carolina, who has been secretly married to Paolino (the tenor part) and must watch both herself and him wooed by others, is perhaps the only sympathetic figure in the piece. Yet whether intentionally or unintentionally, at the director or singer's behest, this production played down that role. Carolina, in body and phrase, is too dully self-satisfied at the beginning and simply stepped-on later, and her eventual victory is more just relief than pleasure. It has long been the genius of singers to endow even the most scheming & shallow "-ina" role with the unmistakable grace of real feeling, and its absence in the rather more likely Carolina leaves a hole.

In fact real feeling peeks out only in spinster aunt Fidalma's first-act praise of marriage (well sung by mezzo Fredrika Brillembourg) and quickly recedes thereafter. Perhaps it's an attempt to sidestep the stickier aspects of the story -- e.g. Paolino's inability to face his own culpability in creating the mess, a thread that's never actually resolved -- but the exaggerated buffo pitilessness actually highlights it. The worse Carolina's relatives act, the worse Paolino looks in having arranged for his patron to marry one of them (Carolina's sister, perhaps the worst of the bunch).

Cimarosa wasn't Mozart, but I fear this production highlighted rather than hid his deficiencies.
Posted by JSU at 6:00 PM 1 comment:

This is, honestly, hilarious -- mostly because it will fail miserably and only damage the Associated Press brand.
Posted by JSU at 9:58 PM No comments:

A trip out of town resulted in a more thorough incommunicado than I'd expected. A review from before that should follow soon.
Posted by JSU at 2:43 AM No comments:

Farewell to the off-topic diva

At this point most who care have likely long since seen this interview or simply heard the news: ballerina Veronika Part -- this blog's official off-topic diva -- is leaving ABT after this season.

Her time at ABT was surely frustrating -- if perhaps not nearly as sad and awful as that piece might have us think. Each of her lead roles here has shown her rare expressive and communicative art, but the company -- like her previous home, the Mariinsky -- seems never to have taken her seriously. Was it that she -- tall, not super-thin, more artist than technician -- is too idiosyncratic for these institutions' current shape? Was it poor luck, as the scapegoat for McKenzie's awful Burger King production of Sleeping Beauty (in which she got her one and only production premiere)? Dislike from the New York Times?

Whatever the case, Part has meanwhile earned at least a cult following in the city. And the time here's helped her, if perhaps not as much as it could or should have: Odile in yesterday's matinee Swan Lake showed a cruel and reckless glamour alien to the dancer who first arrived with the Mariinsky on their 2002 tour.

At any rate, I can't write about dance, so I'll only note that there are two more opportunities to see Part before she leaves the company.

Afterwards -- I hope, for myself, that these aren't her last New York performances. But I hope for her, as for every artist, that she finds a situation where she is able to give her best.
Posted by JSU at 5:35 AM 1 comment: 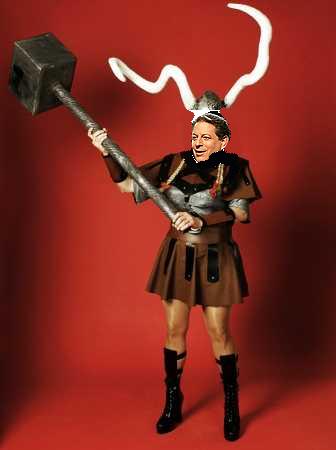 Words fail me in regard to this story, but this photoshop (via Victoria, who may in fact have made it) is amusing...

I predict, however, that the Gore Effect will cause the premiere to be buried in snow.
Posted by JSU at 2:36 AM No comments: