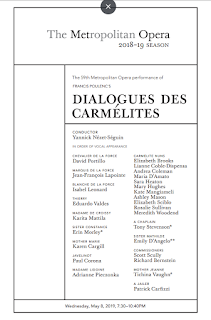 I expected this Dialogues revival - as those of previous seasons - to be effective and moving. What I did not expect, despite an outside hope therefor, was that it would contain within the first act's limited span one more great Mattila triumph, the first since 2012 and one of an all-too-few to be moviecast. If this turns out to be her send-off (which, at 58, need not necessarily be the case), it's a great one.

Felicity Palmer (whose Waltraute I've missed in Met Rings since) was a heck of a singing actress, but in the last two revivals she portrayed a prioress who dies. With Mattila, Madame de Croissy's death itself - enormous and terrible, like the death of Christoph Detlev Brigge in Rilke's prose book - is the main character of the opera's first part. That's as you'd expect upon discovering that this opera could fit such a thing, as Mattila's decade-and-a-half of providing the most significant element in each Met season was built on loading the "terror" side of the Aristotelian schema markedly higher than even this most emotionally extreme art form is accustomed. And amidst this awful struggle - with her wracked body, with impossible responsibilities, with death itself - the loving directness of de Croissy's last advice to Blanche arrives in even more touching relief.

The excellence of Isabel Leonard - Blanche here as she was in 2013 - not only holds the overall show together but provides Mattila the foil her first secondary-role run here (Kostelnicka in 2016's Jenufa opposite the eminently forgettable Oksana Dyka) fatally lacked. The same inner stillness and that made Leonard a near-ideal Melisande earlier in the season also serves her here, if differently: Blanche wants to and should be in that state - one too evidently fit for worry and risk won't suit - but too often can't.

It's not clear whether it was deliberate or fortuitous of Adrianne Pieczonka to portray Madame Lidoine in a manner entirely distinct from the character's predecessor: all motherly love, calm, and composure amidst the storms of trouble. In any case, it works brilliantly - and Karen Cargill, who like Erin Morley (Constance, again reprising her 2013 part) is much more impressive than she was in the Ring, provides a third distinct elder figure with her hardheaded and dogged Mother Marie.

Yannick Nézet-Séguin, as ever, conducts impressively in the direct manner.
Posted by JSU at 11:48 PM 3 comments:

The house debut of 32-year-old Italian soprano Rosa Feola as Gilda was extraordinary enough that I went back between Ring installments to see if I hadn't imagined it. I found a second night even better than the first.

Although Feola (who was runner-up to Sonya Yoncheva at the 2010 Operalia competition) certainly has the notes and technique for the lyric-coloratura parts that are her current career (her Caro nome was a marvel), neither her voice nor her person present what you'd expect therein. Instead of the classic bright, chirpy sound Feola offers a darker, more emotionally charged timbre. And though she can (unlike, say, Diana Damrau) do ingenuous charm, neither that nor coquettish sex-appeal define her focused, presence. The overall impression was of nothing so much as an Italian Dorothea Röschmann with an integrated top extension - someone I'm eager to hear again, in the more serious of the -inas and -ettas though even these likely won't let her display all her powers. (The tragic weight her Gilda took on herself with full awareness before entering Sparafucile's place itself nearly broke the frame of the role.)

Incidentally: the contrast with the other notable female debut of the season - Aida Garifullina, who sang Zerlina in the first of two Don Giovanni casts - is striking. With a glorious silver-bell tone on an outsized scale perfectly suited to this big house and an effective, straightforward charm, Garifullina (who won the 2013 Operalia competition) is the classic soubrette starlet turned up to 11, singing a very similar range of parts to Feola's with an entirely different (but ever-appealing) spirit. Let's hope that she doesn't go off the rails and massacre bel canto for a decade before reinventing herself as a heavier-role singer as the last Russian soprano with this sort of star power did.

The other singers were, as expected, a pleasure - George Gagnidze neither glamorous nor titanic but, as usual, catching the right spirit and Dimitry Ivashchenko a nicely satisfying Sparafucile - with only newcomer Ramona Zaharia's Maddalena perhaps not fitting her part. Matthew Polenzani, too nice to be any kind of malicious Duke, sang well enough (particularly on the second night) for us to accept his caught-up-in-the-lifestyle autocrat at face value.


*     *     *
It wasn't just Polenzani's better form or even the cast's cleanup of stage business that wasn't quite in synch at the first performance that made for the more thrilling followup, but conductor Nicola Luisotti perhaps finally letting Verdi be Verdi. The supreme Puccini conductor of our era - despite a much worse cast, his guidance made the 2010 Fanciulla more of an event than the vocally thrilling one we got this fall - Luisotti nevertheless was the weak link in two previous Verdi shows this season. In the fall and winter Aidas (which were, admittedly, compromised by cast issues) and the spring Traviata (which wasn't the triumph that Anita Hartig's heartbreaking performance deserved), it seemed that he was intent on shaping Verdi's music as he would Puccini's - aiming to maximize phrase and line effectiveness without regard for the underlying beat. This just doesn't work: the alternately melancholy and ecstatic pleasure in the ordered passage of time is the rock on which not just Verdi but the cantabile-cabaletta form of all bel canto opera is built. One can't lose touch with that pleasure - even when it's not foregrounded - for even a moment without making a hash of the aesthetic whole.

Whether because of this opera's more headlong nature or just finding his way to Verdi's style after many performances, Luisotti here more or less restricted his micro-temporal tampering to some bizarre hitches in a single slow part. And by the second night he was not merely setting good starting tempi and getting out of the way but actively working with the underlying time-flow to impressive effect. With luck this development will carry over to future runs of other Verdi works.
Posted by JSU at 3:37 PM 3 comments: 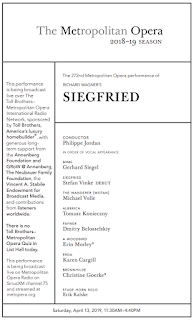 As astounding and enjoyable was Stefan Vinke's vocal endurance and forcefulness in the title role in this house debut last month, so disappointing was the one-note personal characterization that accompanied it. The result was a barn-burner of an aural show that undoubtedly thrilled the general audience but frustrated me as the vocal failures of past revivals had not.

A decade ago, in praise of Christian Franz - whose physical assumption was everything that Vinke's was not - I noted that his Siegfried "didn't, as is sometimes the case, seem the villain of the piece". And with this revival we saw how easy it takes to make Siegfried unsympathetic (one opera ahead of when he does, under mind-affecting magic, in fact act the bad guy). Whether it was the revival stage directors (J. Knighten Smith for the overall Ring, Stephen Pickover for this installment, with Paula Suozzi and Paula Williams assisting) or Vinke's choice or even the nerves of his big debut, this performance maximized Siegfried's buffoonery and minimized his introspection and awakening of self: instead of the archetypal youth maturing to heroism and first love, we got an unchanging brat alternately mugging for approval (entirely inconsistent with his lack of fear and solitary upbringing, one might notice!) and hamhandedly - and without recognition or understanding - forcing his way past everything on stage. With incipient growth and self-understanding no longer established in Act II (where Vinke understandably but unfortunately decided to conserve voice) his union with Brünnhilde in the last act became very odd indeed. (As with other too-cleverly cynical takes, one can argue for the psychological truth of these reductions but they make the story less significant.)

Not that we should short the vocal accomplishment. Vinke's basic sound here isn't the most best I've heard in brief stand-alone doses: though pleasant, there's a too-covered quality that comes out in the lyric bits. But for a small trade (much smaller than what many predecessors have given up just to get through the thing) Vinke gave us a seemingly limitless heldentenor outpouring that sailed through the Forging of Act I and outshouted Goerke's fresh voice in Act III. If only the quality of sound had been matched by a similar quality of sense!

Perhaps Andreas Schager - who made a remarkable NYC debut four years ago as Apollo alongside the Leukippos of this Ring's Loge (Norbert Ernst) - will do better tonight.
Posted by JSU at 2:30 PM 2 comments: