Although this next month is, as far as I can tell, an operatic desert, July brings some opportunities in and around the city.

Despite troubles in LA, film composer Elliot Goldenthal's new opera "Grendel" should begin its New York run July 11. It doesn't look all that promising, but who knows?

August in the city is better, with Zaide and Idomeneo at Mostly Mozart, and the Met's Rigoletto and Traviata in the parks.

There are, of course, plenty of events further afield, but these are in the range of a simple day trip.
Posted by JSU at 3:15 PM 2 comments:

Some bloggers have been prodding me to write more about the Volpe Gala. A few words, for now.

*     *     *
The problem with galas is that they higgledy-piggledy touch too many parts of the opera experience. Pleasure comes from the past, the present, sound, drama, and not least the social occasion. But few enjoy all of these in equal proportion; if there's something for everyone in a gala, there's usually also something to dislike for everyone. It's part of the dizziness: under what lens is each particular bit supposed to make sense? In what context?

At any rate, I don't think a "who missed and who scored" roundup is the most fruitful approach (though I find Maury's valiant effort interesting), and in fact misses the point as much as not. Best, maybe, to start from what was preserved (next week's telecast) and go from there. (One thing that may not be evident on TV, incidentally, is that Frederica von Stade's solo number was noticably if semi-discreetly miked.) I plan a post on that, as well as some thoughts on the Volpe era.

*     *     *
Still, one bit of perspective. Though he was running much behind-the-scenes activity before, Volpe officially took over in 1990. Karita Mattila had made her Met debut that spring, as Donna Elvira. Just two years before -- in 1988 -- Renee Fleming, Susan Graham, and Ben Heppner had won the Met Council auditions, and Deborah Voigt (a Met Council winner in 1985) had gained prominence from winning Pavarotti's competition in Philadelphia. So that was the beginning, and the backbone of both the current roster and the gala itself.

1998, then, was the midpoint of Volpe's tenure. In the spring, Kiri te Kanawa appeared in her last staged production here: the house premiere of Capriccio. Voigt and Heppner opened the controversial (and lately triumphant) Robert Wilson Lohengrin. In the fall, the eternal Placido Domingo and Olga Borodina -- who had just debuted the previous year! -- opened the season in Samson et Dalila. Mattila took her first turn as Elsa (after having done Musetta just two years before). And Fleming starred -- with not-quite-Met-regulars Cecilia Bartoli and Bryn Terfel -- in the then-new production of Figaro that's with us today.

More revealing, I think, than the almost embarrassingly successful second half of the previous Saturday's Dorothea Röschmann/Ian Bostridge duo recital was its first.

They began the all-Schumann program with his Op. 78 duets. Rapport was bizarrely lacking: the two seemed psychically separate, perhaps even at odds. The lightly cruel comic interplay of Tanzlied worked fairly well; the other songs not so much.

The solo selections of the main course -- the complete Myrthen, Op. 25, divided between the two -- shed a clearer light. Bostridge, despite his stage contortions, inability to look at the audience, etc. (all fully evident this evening) -- or perhaps enabling these -- he is certain of his audience, and comfortable within them. Whether by stardom or birth, he acts as if their response is guaranteed, and shapes effects for them with confidence.

Röschmann, though, is naked, almost terrifyingly so. She began as one tentative, singing Der Nußbaum (one of the cycle's famous selections) with little blissful dreaminess but much of the therein-mentioned girl's young longing. Desire is her metier -- a lover's desire, exquisitely vulnerable to nonreciprocation; delivered on her quick and expressive vibrato, it's an operatic wonder. But how strange it was to see this great artist apparently taking such a position vis-a-vis this recital audience... Her body language genuinely seemed to doubt its approval or even acceptance. (Did she think it all simply Bostridge fans?)

Not until her songs' emotions reached heights of woe, rapture, and faith -- in unforgettable, totally immediate performances of Die Hochländer Witwe and Rückert's two "Lied[er] der Braut" -- did Röschmann appear sure in who she was, and bring a balance to that recital stage.


UPDATE (5/23): I hadn't realized until today that Röschmann and Bostridge's program duplicated this disc they did in 2002 for Hyperion's Schumann song series. If it weren't for my wierd inability to listen to recordings these last few years, I'd offer a comparison. I'd be interested in the thoughts of any who've heard it, though.
Posted by JSU at 6:10 PM 1 comment: 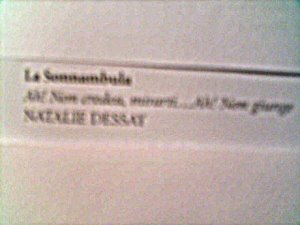 This article from Monday's New York Sun demonstrates Peter Gelb's remarkable talent for getting reporters to take his spin of renewal and novelty at face value. It's valuable -- he needn't actually tamper with success to generate hype. (Whether he nevertheless will tamper remains to be seen, of course.)

*     *     *
Tonight I -- along with pretty much everyone else in operaland -- will be in attendance at Joseph Volpe's retirement gala. I may try posting by email at the break, though giant gala gatherings don't usually inspire such brevity. Those not able to attend can listen (with a slight delay) on internet radio. Either way, it's a fittingly grand conclusion to the season.
Posted by JSU at 12:27 PM No comments:

Incidentally, most reviews of those London Cyranos are unhelpfully Domingo-centric.
Posted by JSU at 7:55 PM No comments:

Once upon a time

Among the stories of yesterday's abominable anniversary was this tidbit:

Take the case of Hao Jiangtian. He is one of the New York Metropolitan Opera's superstars. But he grew up in China during the Cultural Revolution when classical music was considered capitalist and decadent.

His piano teacher was thrown into prison. His musician parents destroyed all their classical records to avoid the same fate, and many of their colleagues committed suicide.

But now it is not the past he wants to talk about but the future. He says that since the Cultural Revolution, millions have started to study music in China and he is playing a key role in helping them develop their talents.

Hao will, incidentally, be in the cast of the Met's new opera next season. Will it (like its director's recent movie), I wonder, apologize for the murderous, arbitrary, rapacious and tyrannical strain that has yet to pass from Chinese government? I was concerned enough before I learned (from a myth-perpetuating Times article) of the Ford Foundation's involvement...
Posted by JSU at 7:46 AM 1 comment:

Press neglect of the most stunning Met debut in decades (sic!) continues, so a few more of my words on Wednesday's Lohengrin.

Besides Karita Mattila, it was a wholly different cast from opening night's. Klaus Florian Vogt aside, this second cast (Margaret Jane Wray, Greer Grimsley, Rene Pape, and Charles Taylor) brought stronger, beefier sounds than their predecessors. But not only sound changed, but apparent relationships between the characters. The villains first. Grimsley's Telramund was a stern, unyielding one, lacking the melancholia of his predecessor. His wife (Wray), on the other hand, became more human, perhaps too much so. The warm vibrato-bearing middle of her voice was welcome to hear (the wild top, on this night, less so), but combined with a more relaxed and straightforward manner of posing to make Ortrud seem oddly non-villanous; the fake fawning over Elsa appeared somehow more in character than her pagan curse.

Between Vogt and Mattila it was quite different. Mattila had not, as I feared, imploded under the outrageous strains of this production (coming after some taxing Fidelios), but she wasn't finding the singing as easy at the end of the run as the beginning. (She sounded outrageously strong this night.) Nevertheless (or therefore?) she was as dramatically present as ever.

With Vogt, their characters' dynamic snapped cleanly into focus. Of otherworldly delicacy in sound, his Lohengrin was similarly pure in manner: masculine still, and instinctively righteous when challenged, but free from the torment, envy, and uncertainty of true mortals. Alas, Elsa is all too human; despite having dreamed of divinely touched being (having an affinity for it), and desperately desiring him as the missing element of her life, she cannot really believe that he can exist, not in the same world as the endlessly base Ortrud and Telramund. It's their examples that ensnare her more than their arguments.

*     *     *
Yesterday Vogt seemed to save much of his best sound for the third act, which was remarkable indeed. (That messa di voce on "taube": exquisite.) Mechanical problems -- which got Wednesday's performance off wrong too, as King Henry's mobile platform rolled awry and ran into a light prop -- didn't help the start; not only were many Met Titles screens down for Act I, but Lohengrin's swan didn't make it in from offstage for his entrance. I think most of the audience figured Wilson just wanted it swanless: what they made of Act III's avian debut I don't know. But by the latter acts it was forgotten for a memorable performance, perhaps the best yet at delineating character (Richard Paul Fink and Luana DeVol outdid themselves on that front this evening).

*     *     *
Blog commentary on Wednesday's debut at Operacast, Balcony Box, and two blogs new to me (and the latter actually new to the world). Meanwhile Maury offers thoughts on Saturday's second Vogt performance (and some very funny pictures).

UPDATE (4/9): Alex at Wellsung also weighs in on the Saturday performance, while Geoff Riggs at the Operacast blog is inspired to an insightful essay.

Meanwhile the only press notice is this headscratcher from Martin Bernheimer, who seems to see only what he expects to see.
Posted by JSU at 11:49 AM 2 comments:

Despite a very optimistic article in last week's NYT (which now looks rather odd -- all quotes being from one side), New York City Opera's plan to move across Amsterdam Avenue (the back side of Lincoln Center) is apparently toast.

On the one hand, it would be nice to have a somewhat smaller, built-for-opera hall in the city. (Though who knows if they wouldn't still continue to use sound sweetener.) On the other hand, it's hard to see how going from 2750 to 1800 seats would have meant anything but price increases all around...
Posted by JSU at 9:15 PM No comments:

If Ian Bostridge were a heldentenor, he would be Klaus Florian Vogt. No -- not exactly. If a tenor had all the youthful vulnerability, pinpoint delicacy of word, phrase & dynamic, and purely lyrical (sometimes plaintive) tone of, say, Bostridge (Polenzani? McCormack? -- insert name here), but within a heroic stage persona and instrument that projects easily over a full Wagner orchestra for all of Lohengrin... If he sang it as gracefully and authoritatively as a Schumann lied...

That would be impossible, right?

Honestly, I couldn't have been more amazed if this Vogt had ridden in on an actual swan. Nor, I think, the rest of the stunned and explosively loud audience.

I don't know what Vogt will have done in five years, or ten, or twenty. But I'm glad I witnessed this night's marvel with my own ears.


UPDATE (8:45AM): I've slept a little & read some Opera-L notices, and I still can't believe what I heard last night. It's still clear in my ears, though.

Incidentally, if the post does not make clear -- this was Vogt's Met, New York, and American debut.
Posted by JSU at 12:47 AM No comments: