The 2007-2008 season, like most at the Met, ended uneventfully: a series of good performances, yes, but no climactic closing event. But after last Saturday evening's Macbeth -- the end of the season at the house -- were two Met Orchestra concerts at Carnegie Hall. It was hard to feel the season over with these after-events remaining.

Both -- an all-Mussorgsky concert with Gergiev and Rene Pape and last night's mix of Carter, Schumann, and Tchaikovsky with Levine and Jonathan Biss -- turned out to be successes, though neither soloist entirely satisfied. Pape has, of course, an Important Voice, but doesn't always deliver much more: in this case, his reliance on prompters in the house turned into a rather homogenizing outing-with-a-music-stand at Carnegie. I've seen Matthias Goerne interpret brilliantly while staring at reference material, but the Songs & Dances of Death were fairly heavy going here. The Boris Godunov monologue fared better, but I was surprised to see Pape singing from a score to a part he's already done complete.

Biss, too, is a terrific pianist of his type, but I've always found him too much Eusebius and not enough Florestan -- even (rare) violence comes out tasteful and refined.

At any rate, the orchestra responded quite well to Gergiev (in his last outing as Principal Guest Conductor) and Levine, though I haven't entirely warmed up to new oboist Nathan Hughes, and Elaine Douvas -- for whatever reason -- hasn't been the same since about two seasons ago. It was a good -- if non-operatic -- close to to a successful season.

*     *     *
I've contemplated moving from New York (both more and less seriously) several times over this blog's history. Each time I wondered what I would do with the blog, which from the first has focused on the actual experience of opera in the flesh. There's actually much to say about the (mediated) experience of opera far from its performance centers, and it's occurred to me that, without actually leaving New York (and -- to be clear -- I don't currently intend to move), I might mine this vein during summers, when the city is as operatically provincial and distant as any other you might name.

So expect in this space an inaugural "offseason edition" of An Unamplified Voice, different in flavor and content. It's a first try, though, so please bear with me.
Posted by JSU at 8:23 PM 2 comments:

The last Met performance this season of Mozart's Abduction from the Seraglio -- almost two weeks ago now, I'm afraid -- was, as reports had suggested, a modest but real success. I was pleasantly surprised by the second couple: Aleksandra Kurzak finessed the high notes a bit but played Blonde with a winningly earthy womanliness, and Steve Davislim showed a light but charming tenor, just the thing for Pedrillo. Kristinn Sigmundsson has neither huge round sound nor the trick low notes but I could listen to his ease and fluency as Osmin all day. (I'd love to hear him as Ochs.) Polenzani was pure pleasure to hear as usual.

If there was any disappointment it was in fact Diana Damrau, who despite her comic affinity is even worse of a serious actress than I'd feared. Worse than the expectedly cool and less-than-traurig "Traurigkeit" was the exaggerated bobbing (with, unfortunately, accompanying heavy sonic accent) of her body that was supposed to stand in elsewhere for strong feeling. That said, she can sing "Marten aller Arten", which counts for a lot.

David Robertson conducted with emphasis on clean light textures, but used a light hand outside of the well-coordinated ensembles that were the evening's highlight. Another modernist approach, but much more effective than Bicket's for this month's Clemenzas.

Polenzani, Kurzak, and Davislim reunite in Chicago next March for another Abduction, with Erin Wall as Konstanze. Looks promising.

*     *     *
I did see another performance of La Clemenza di Tito -- the last this season. The singing was again notable, but what most stuck me was how strongly -- between Tamar Iveri's Vitellia and Susan Graham's Sesto -- the mixed and unclean feelings of a poisonous relationship were made tangible. Iveri can't sing her part as strongly as her predecessor Melanie Diener, but Diener was no schemer and the relationships in that last revival never came into such focus.

Also, I've never seen an audience made so enthusiastic by Mozartean opera seria.
Posted by JSU at 3:11 PM 1 comment:

In the house the overpowering first impression -- to my ears, at any rate -- of his sound is its spaciousness. It's within this heroic-scale frame that his distinctive throwback vibrato fits and works, bringing character and life to his lyric sound. The close-miked broadcast squashes any sense of space and size on top of making the vibrato more prominent in an absolute sense. As is so often the case, a very different impression.

His most recent solo CD ("The Golden Voice"), on the other hand, seems engineered to hide the distinctive timbre his vibrato imparts, and a lot of less detailed speakers will effectively erase it. But its main problem is something else: specifically, that the disc was recorded almost exactly three years ago, when he was just 27. Every year for a young singer is crucial, and the difference between the struggling-with-pitch tenor of promise on the disc and the remarkable singer of even a year-and-a-half later was huge. And the show-stopper we're hearing this month is nowhere near captured on disc.

Perhaps it's just coincidence (and, given the paper's chronic financial woes of late, not a surprising one) but the New York Times has bought out the reviewer (Bernard Holland) who couldn't be bothered to attend the OONY Gala he reviewed.

Holland never showed signs of actually enjoying opera -- and in fact seemed to resent much of the standard rep -- so perhaps this is a relief for him as well.
Posted by JSU at 10:34 PM 1 comment:

It's a glorious indulgence of luxury casting that brings us this month's return (beginning last night) of Verdi's Macbeth at the Met. Where else could you find -- for one aria each! -- Rene Pape pressed into service as Banquo and Joseph Calleja as Macduff? Pape, as ever, makes the most of his short turn (actually, I admit I've never found any of his longer parts as effective as his Marke, Escamillo, or Pogner). Meanwhile, it's been a very good year for tenors, but if the next Björling or Pavarotti is already out there, it can be no one but the 30-year-old Calleja. As he did in last season's Rigoletto, Calleja put on a display of old-school (pre-veristic) singing that brought the house down -- and, amazingly for the short part of Macduff, earned him the biggest ovation at curtain-calls. Lyric beauty plus natural unforced power plus stage ease equals stardom, but add bel canto mastery and an instantly-recognizable throwback timbre to the mix and you have a truly sui generis tenor whose potential equals the greatest. (Let's hope he's not prone to overdoing either food or drink...)

The danger of superstar bit players, though, is that they might unbalance the show. It actually happens here: nominal leads Carlos Alvarez and Hasmik Papian are commendable but workmanlike, so their fates fail to dominate the proceedings as they should. The fall-winter casts, despite flaws, seemed to sell the piece better. The January night I saw them, Guleghina (as ever) chewed scenery like no tomorrow and was in pretty good if unsubtle voice, while Lado Ataneli sang well and seemed more decisively engaged in the events than Alvarez. Banquo and Macduff were John Relyea and Dimitri Pittas: two young singers who sang strongly, but not so overpoweringly as to throw off ensemble balance. Even Levine seemed more comfortable back then (but then, he hadn't just returned from a weeks-long Boston run of Troyens).

I'm not sure why so many seemed to dislike this production. Adrian Noble is a British Shakespeare director, so what's the surprise when it looks like a British Shakespeare production? There was no great revelation, but the simple color/light-dark contrasts work, set elements and costumes are handsome and uncluttered (the cut-out space above was nice), and I found the walking-on-chairs bit appropriately eerie.

Its present incarnation is less than the sum of its parts, perhaps, but Calleja's not to be missed.


UPDATE (10:30PM): A little bird tells me that this cast didn't have stage and orchestra rehearsals until the day of the performance. So no wonder those who were called upon to do more than stand and sing one aria came off less well... Expect better, perhaps, in future shows as the principals become familiar with the thing.
Posted by JSU at 4:56 PM 2 comments: 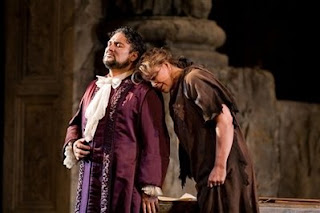 After the male-centeredness of Stephen Wadsworth's kitschy, over-the-top direction of Iphigenie earlier this season made Susan Graham's character a bit player and third wheel in her own eponymous opera, Graham now finds herself better-highlighted by the revival of Ponnelle's classic "La Clemenza di Tito" production. Her Sesto here is one of the peak assumptions that make operagoing worth it. It would be worth seeing even in a lesser cast, and makes even the superficial sheen and relentlessly airless regularity of Harry Bicket's conducting bearable.

Bicket was terrific in Rodelinda but is the main liability here, playing up only the public side of Mozart's writing and burying the private (ideally, as heard in, say, Levine's most recent Cosi, the two intertwine and inseparably interpenetrate) to the point of straitjacketing the wind solos (here, by Anthony McGill and James Ognibene). But the singers make it work. Tamar Iveri -- though, like most singers, she has issues at one end of Vitellia's great range (here, it's the bottom that's recessed, particularly noticeable in her Act II scena) -- makes excellent dramatic sense. Anke Vondung I found unexciting as Cherubino earlier, but the more serious Annio suits her better and she did well in his aria. (I noted last time that though she's German, Vondung's even-tempered, evenly-produced singing reminds me of an American mezzo's, and she naturally fits alongside Graham.) Ramon Vargas took a bit to warm up but offers a voice of real authority in the title role.

Of course, we know how good Vargas is. Graham I've always liked, but the control and naked feeling she shows in Sesto's "Deh, per questo istante solo" is actually revelatory. Her parts here have been so straightforward that to see her visibly and audibly drowning in Sesto's self-loathing is a shock -- of the best sort.


UPDATE (8PM): The AP wire brings a rave review. Another refined and positive perspective is offered at I Hear Voices, where it seems Rodrigo Maffei Libonati has finally put up a blog.
Posted by JSU at 3:54 PM 6 comments:

Three years ago, I posted some thoughts on La Clemenza di Tito -- Mozart's masterpiece of 1791 -- and the Met's now-revived (as of this coming Saturday) production thereof.

Given Susan Graham's successes (elsewhere) as Sesto and how terrific Ramon Vargas has been of late, it's a shame this run seems so poorly sold. Of course, that Gelb and the press only seem to promote revivals for sopranos doesn't help...