Leads Anita Rachvelishvili and Yonghoon Lee are, it turns out, who we thought they were: a pair of astonishing-voiced singers who can carry any production. Rachvelishvili still hits some pitch issues at the top of her range, but the main body of her sound is as fully and gorgeously textured as any mezzo in this Golden Age. Lee, meanwhile, shows here as strongly as he did as Don Carlo that he's something like an ideal romantic spinto tenor: he feels -- and of course shapes -- these parts' great tragic phrases so strongly, so grandly, that the striking squillo of his tone and the full expansiveness of his high notes come almost as obvious corollaries. More, please.

The other headliners were mixed. Best was American bass-baritone Kyle Ketelsen, who in addition to being an appropriately handsome Escamillo was the most vocally authoritative one since Rene Pape about a decade ago. Less good was the Micaela, Kate Royal. She phrased just fine, but even a vibrato-aficionado as I -- Calleja, Radvanovsky, and Röschmann may be my favorite operatic sounds -- found little to enjoy in Royal's actual singing. Unlike these other vibrati, Royal's does not seem the healthy individual expression of a strong support, but something less felicitous. I hope she's indisposed or not entirely recovered from her last pregnancy or... something, because otherwise I'm concerned for the state of English ears. Her sound did not blend at all well with Lee's, but that at least makes a sort of dramatic sense.

Debuting conductor Michele Mariotti was somewhere in between. The current principal conductor at Bologna showed a number of virtues: precise control of ensembles, firm rhythmic sense, and the wisdom not to get in his singers' way -- and, indeed, helping them make much of slow climaxes of the piece. And so on this night the highlights were the Micaela-Jose duet, the Flower Song, and similar still segments throughout, here done with a rare unity and concentration. But despite all that -- and despite fairly snappy accounts of the first- and last-act preludes -- Mariotti seemed to have little interest in giving the piece an overall shape, quite happy to let the colorful bits slack unhurriedly, as if in fact on a hot Spanish afternoon, and to let the more urgent portions approach but never quite cross over into excitement. This appears to be Mariotti's legitimate view of the piece, and he shows skill in bringing it to life, but it's a letdown after how Nézet-Séguin opened the production three seasons back.

So the show falls into scenes, which is not the worst thing given the way its cast brings them successively to life.


*     *     *
Lee will, it seems, be back in the not-too-distant future for revivals of Ballo (new later this season) and Trovatore. In this interview from last year (around the Nabucco revival) one can see him talk about the time before his big break: fascinating stuff.

Met season preview, part 2: who's on

Collated from the February and August posts, with some further noted changes. As in previous years, operas are listed in order of first appearance. Some one-off cast combinations are omitted.

L'Elisir d'Amore (new Bartlett Sher production)
Netrebko, Polenzani, Kwiecien, Maestri / Benini (opening night through October)
Netrebko, Polenzani, Kwiecien, Schrott / Benini (late January through early February)
Anna Netrebko gets a second consecutive opening night.  Nemorino is an excellent part for Matthew Polenzani, but I don't expect this to be any more satisfying for non-Netrebko fans than her previous shot (when her voice was better suited to such parts) at Donizetti comedy. I'd grade Bartlett Sher as one-for-three at the Met so far (Hoffmann yes, Barber and Comte Ory no), but his misses are at least inoffensive. I suspect Maestri will be the more humane option as Dulcamara.

The Tempest (new Robert Lepage production)
Luna, Leonard, Davies, Shrader, Oke, Burden, Spence, Keenlyside / Adès (October-November)
I know nothing about this piece, but I'm pretty sure it can't be as irritating an attempt at unwriting the original Shakespeare as last season's Enchanted Island was.

Le Nozze di Figaro
Kovalevska, Erdmann, Schäfer, Finley, Abdrazakov / Robertson (October-November)
Very promising cast for this revival, though Mojca Erdmann is again in a part that's perhaps not quite high enough for her voice to shine.

Un Ballo in Maschera (new David Alden production)
Radvanovsky, Kim, Zajick, Álvarez, Hvorostovsky / Luisi (November)
Radvanovsky, Kim, Blythe, Álvarez, Hvorostovsky / Luisi (November-December)
Radvanovsky and Hvorostovsky: two great (contrasting) tastes that taste great together. If only the run had Calleja to round out a full dream cast... not that I expect Marcelo Alvarez to be any less than enjoyable & professional, as he was with these singers in the McVicar Trovatore premiere. Whether Alden's production will be helpful, incidental, or ruinous is another matter.

La Clemenza di Tito
Crowe, Frittoli, Garanca, Lindsey, Filianoti, Gradus / Bicket (November-December)
It's Garanca, not Lindsey, as Sesto. Not sure this is for the best.

Les Troyens
Voigt, Graham, Cargill, Giordani, Cutler, Croft, Youn / Luisi (December-January)
It seems that Susan Graham has been waiting forever for this revival -- and in fact it will have been almost a decade since that magic first run with Lorraine Hunt-Lieberson's great Met triumph as Didon. Not sure what vocal form the other principals will show, but I think I'll miss Matthew Polenzani's utterly perfect Iopas this time...

La Rondine
Opolais, Christy, Filianoti, Brenciu, Croft / Marin (January)
Kristine Opolais was supposed to have debut in last season's Boheme (as Musetta), but didn't for whatever reason. There's good music in this opera, but I'm not sure it will be half as interesting without the meta-angle that Angela Gheorghiu brought to its last run. Incidentally, Ion Marin hasn't conducted at the Met since 1993.

Parsifal (new François Girard production)
Dalayman, Kaufmann, Mattei, Nikitin, Pape / Gatti (February-March)
Dalayman, Kaufmann, Mattei, Nikitin, Pape / Fisch (March)
When the most doubtful part of a cast is Jonas Kaufmann (who wasn't that great in his last Wagner outing here), you've got one heck of a promising show. This is Girard's first big-house/standard-rep show; he of course directed the film 32 Short Films About Glenn Gould.

Don Carlo
Frittoli, Smirnova, Vargas, Hvorostovsky, Furlanetto, Halfvarson / Maazel (February-March)
A cast that perhaps should have been the premiere lineup... but is seriously diminished by Sondra Radvanovsky's replacement by Frittoli. (Not sure why, since it's two months after the final Ballo.) And too bad it's not the previous production that's being revived...

La Traviata
Damrau, Pirgu, Domingo / Nézet-Séguin (March-April)
Promising young tenor (Saimir Pirgu) and the season's only scheduled appearances by great conductorial hope Yannick Nézet-Séguin, but it's already past time for Gelb to kill this insultingly stupid & bathetic Willy Decker nonsense under the rubric of having many and rapid new productions. Violetta and papa Germont allow a range of voices, but Diana Damrau and Placido Domingo nevertheless aren't the most obvious choices for these either...

Dialogues des Carmélites
Leonard, Racette, Morley, Bishop, Palmer, Appleby / Langrée (May)
This show always works, but I'm not sure Louis Langree is the man to conduct it.

With City Opera reduced to a sadly shrunken half-existence, this will mostly be the Met this season.

Metropolitan Opera
Elisir (M/Th), Turandot (T/SE), Carmen (F), Trovatore (SM)
A new, opening-night production plus some grand warhorses. Carmen is probably the most promising of the bunch, with two young fantastic lead voices: Anita Rachvelishvili, who already seems a veteran in this, and Yonghoon Lee, who's impressed me more than any other middleweight tenor since his debut as Don Carlo two years ago -- Jonas Kaufmann very much included; in fact Kaufmann appearances since then have had me wishing it were Lee instead.

Turandot does have a promising lineup of shouters (and actually Hibla Gerzmava is rather more), if you'd like that. The rest? We'll see.
Posted by JSU at 5:31 PM 3 comments:

Met season preview, part 1: getting in

The 2012-2013 season finds significant changes in the process of actually getting Metropolitan Opera tickets.

This post at "Superconductor" previewed the changes in detail when the Met first announced them months ago. In brief, there are three main alterations:

First, every level of the house has been carved up into "Premium", "Prime", and "Balance" designations, with the nicer boxes divided into "Front" and "Rear". This may sound like a mild continuation of the simple "Premium" carve-out that began five years ago, but a glance at the seat picker tells quite another story. The sections are now split approximately into thirds by distance from the stage. (In Dress Circle, though, the wheelchair seats have almost entirely swallowed Balance.)

This is, of course, a price increase -- the official claim is 7.6% average for single tickets -- but it's at least as importantly an attempt to eliminate the bargains in the house. (There's now, I think, only one area left that's worth much more than it costs -- and it's not very available anyway.) This has obvious short-term gain, but at an equally obvious cost to subscribers, subscription incentives, and general long-term goodwill of patrons. (The comments to the WSJ piece are telling.)

The second change is perhaps supposed to offset this a bit. Under the "dynamic pricing" model, ticket prices will actually increase as demand goes up. So prices may well rise if you don't lock in early. 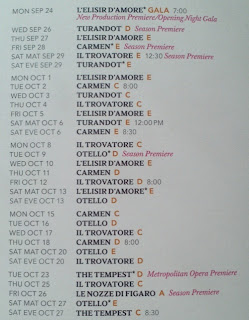 The third change is probably more significant than the second, but appears to be hiding under talk thereof: the Met has actually already set varying initial prices for every show this season. (Information on this is in the subscription book, but doesn't appear in any easy to find place online, presumably because the house doesn't want you to know how much a show/seat initially cost.) Performances are categorized from A (cheap) to E (expensive), with special F (family -- kids' versions) and gala categories as well. This is both an outgrowth of the old "more expensive matinees/weekends" policy and an unprecedented price variation by cast and production.

Instead of going night by night, let's cross-reference the prices by run to the expectations set out last month:

What do we see? Well, Mozart is a bargain, matinees are still expensive (the A/D, A/B/E, and C/E shows are matinee-dependent), and that wretched Decker Traviata is an even worse idea than you might have thought.
Posted by JSU at 4:40 PM No comments:

The polite fictions that order our lives seem strong and even true, because we imagine that the social equilibrium they protect and embody is permanent and universal and self-sustaining.

It is not. They are not. The world shifts under us even if we forget. This happened, even if there was (and remains) no polite space for it even to be contemplated.

The final segment, Götterdämmerung, was caught in my lost half-season of posts from 2011-2012 (which may yet be resurrected from notes). It was, production-wise, the most comically literal installment of all, and I wonder if the intimate HD treatment won't make this seem more silly rather than less.
Posted by JSU at 6:58 PM No comments: