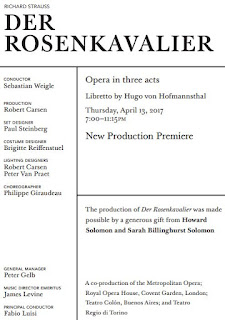 Robert Carsen and his production colleagues for this new staging of Rosenkavalier were, on this first night, greeted with a mix of boos (which, unlike some previous directors, he took with grace) and bravos. Both partisans were more or less in the right - more's the pity, as Carsen's prior Met efforts (Onegin and Falstaff) were unqualified triumphs.


*     *     *
The musical side was, if not quite a triumph, certainly a success. Renee Fleming basically reprises her 2009 interpretation, which eased my worry that the most publicized Marschallin of her day would never actually give an outstanding performance. Nor, as one might have feared after Merry Widow, has her voice noticeably diminished in this role: though, as with many lyric sopranos in Strauss, the lower end of her part sometimes has difficulty being heard, Fleming still has the breath and lyric beauty for the Marschallin's role, which her sound was probably too fat for at the beginning of the century in any case.

The rest of the cast seems well-chosen to complement its central figure - Elīna Garanča (Octavian), Günther Groissböck (Ochs), and Erin Morley (Sophie) all succeed from panache, characterization, and well-shaped singing rather than any overwhelming depth or beauty of sound. And all do succeed, though only Groissböck's vigor of person (weakish low notes notwithstanding) really stands out among recently-seen alternatives. Best for pure ardent vocalism was Matthew Polenzani as the Italian Singer.

Sebastian Weigle, who just came off a successful run in the Met's Fidelio revival, does well with the bigger shapes and transitions of the work (and doesn't make any huge misjudgements like de Waart's super-slow final trio in 2009), but the actual sound he gets from the orchestra is a bit coarse, less satisfying than what we heard in Fidelio.


*     *     *
Carsen's production is built around a visual symmetry similar to that in his Falstaff, where the images from the first scenes reappear, transformed, in reverse order around the central scene. The elaborate scene-by-scene mirroring in that show brought to mind the palindromic construction of Berg's Lulu. This show's symmetry is less complex - with one set per act, the last simply echoes the first - but it suggests Berg's 1930s masterpiece even more strongly, both in its progression from high to low and its concomitant introduction of modernist tropes. And therein lies the problem.

Notwithstanding the transposition to 1911 (the year of composition), the first act in this show is quite faithful to Strauss and Hofmannsthal's creation. Of the two major purposes of moving the staging forward in time - recounting the original story in a context more familiar to the audience and adding/substituting new story elements - the change here serves the former, providing mostly just different clothes and hairstyles for those onstage. The furniture and decor look back to the past, the personenregie would suit pretty much any production ever, and the only distinctive bit of staging is a lowering of lights into a spotlight on the Italian Singer - with the servants and visitors listening, rapt (recalling the Ivor Novello piano scene from Gosford Park) - as he sings his first verse. A nice touch, though the asymmetry it creates with the more plainly staged second verse is a bit jarring.

The second act introduces the first significant changes. Faninal's home, modeled (per the program interview) on the relatively stark early modernism of the Looshaus, is a huge shift not only for its hard, unornamented black-and-white surfaces but for the big artillery piece that begins in and later (on Ochs's servants' disruption) returns to the stage's center. Faninal delivers his initial words to Sophie while leading a shooting-party of his rich friends across the stage, while he later passes out rifles to Ochs's retinue.

The germ of this stuff is in the text: Ochs mentions in the first act that Faninal made his fortune in the arms business. But Hofmannsthal's story is about the social subordination of real wealth and real power, not its ascendance, and this architectural flaunting of a new aesthetic (vs just new money) does not fit. Again, however, the personal direction of the main characters is as appropriate as ever, with Erin Morley's wholly sincere Sophie as sympathetic as in 2013. So - boos for its initial stage-picture notwithstanding - the real jarring change is the invocation of actual war in the act's second half. The doctor tending Ochs's small wound isn't comic but in full white surgical garb (with mask) and accompanied by similarly-clad assistants and a gurney, while the Ochs entourage mimics, during their threats to the offstage Octavian, crawling through a trench.

After these visuals, the particular degraded mirroring of the first-act set we get in the final act isn't a huge surprise. The imperial/aristocratic portraits that decorated the Marschallin's boudoir have become painted nudes in a cross-dressing proprietor's brothel - which transform, in the scare-the-Baron segments, into glass windows showcasing strippers. We are clearly past the bounds of not only 1740's Vienna but also 1911's.

Now it's true that the unfamiliar trappings of 1740s-ish productions rarely convey the sense of seediness that drives Faninal's outraged reaction and make an even more dramatic contrast for the Marschallin's surprise entry, and so again one might consider this an exaggerated rendition of a point actually in the text. Not so much the other changes in the last act. First, instead of Octavian (as "Mariandel") dodging Ochs's advances, here Mariandel is the aggressor, pawing and dry-humping (and trying to fellate) Ochs as he squirms uncomfortably. Though clever and seemingly in tune with the zeitgeist, having Octavian even the score with Ochs in this way - by making him the object of another's unwelcome desire rather than by leading on his own - breaks not only the characters' arcs and the "Viennese masquerade" flavor of the segment but the crucial symmetry of the opera. For Octavian/Mariandel puts off Ochs with a travesty of the melancholy sentiments with which the Marschallin pushed him off, a reversal that prepares Octavian (Ochs, as the comic foil, leaves the stage just as he entered at the show's start) for his transformation and reconciliation within the climactic trio.

The one really indefensible change is left for the end. After the sex show hijinks, we again return to normalcy with a straightforward staging of the Marschallin-Ochs confrontation, his exit, and the lead-in to the trio. It's here that the high-to-low motion of the opera's action reverses course, as the Marschallin clears away plotting and counter-plotting with firmness and generosity. We hear it in the music, too, as the broad ditty of refusal with which "Mariandel" starts putting off Ochs ("Nein, nein, nein, nein, I trink' kein Wein") reappears, transformed, as the sublime opening to the musical-emotional climax of the piece ("Hab' mir 's gelobt"). But we don't see it in Carsen's staging: after the Marschallin leaves the young couple (incidentally, having her make eyes here at the Commissioner on the way out is another too-clever exaggeration of a hint in the text) to bring Sophie's father, they sing the final duet while making out on the brothel bed. When she and Faninal return, the young couple do not follow them out after the duet's second verse for the social triumph the Marschallin has planned - Faninal getting to parade an even more desirable engagement and the great lady's favor in a ride through Vienna - but continue to make out (with little apparent regard for hygiene) until the scene splits to show the oncoming Great War. We close not with betrothal and social resilience but fornication and violence - the compulsion-driven modernist world of, say, Lulu.


*     *     *
The problem here is that Der Rosenkavalier is not naively historical - the product of some undereducated, less-than-wholly-self-aware savant(s) - but is, in fact, a more profound reaction to its context than any historicizing revision could be. If anyone could sense the end of the old world coming, it was Hofmannsthal and Harry Graf Kessler (later a player in Weimar Republic politics). But what they and Strauss shaped from this was not some invocation of the stark future - even Hofmannsthal's later wartime opera embraces the world in a way quite far from modernist - but a dream of what has been, an apologia for the aristocratic era of Europe so vivid and poetically truthful as to outlive not only the war that ended that era in real life but the modernist aesthetic that the war and its successor catapulted to preeminence.

Der Rosenkavalier has survived because it distills a social and cultural order from within, on its own idealized terms. War (the Ottomans, we might remember, were at Vienna's gates just three generations before the 1740s), lust, the disreputable and desperate: these things exist in the opera's world and text but only as contrast, not as the significant matter. Also, of course, present is the all-destroying passage of time... but the opera, unlike this production, is not a slave to that. At this staging's curtain we are, I presume, supposed to react in shock and resentment at the breaking of the peace, but the Marschallin's words and the very existence of the opera teach us otherwise. Our losses to time are neither complete nor completely permanent. And how we bear our losses... Well, it should be more graceful than this.
Posted by JSU at 7:50 PM 2 comments: