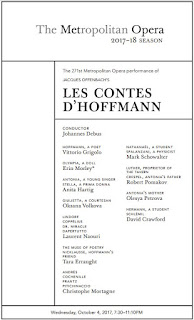 
If the new Norma was less than the sum of its parts, this season's revival of Hoffmann is the opposite: a satisfying whole despite two (complementarily) imperfect casts. Satisfying to me, anyway. As I noted an eternity ago, others' attentions are drawn more to other things.

The show would take a lot to fail given its foundation: production and conductor. The Bart Sher staging from 2009 has, as I more or less predicted, become a familiar classic, illuminating the lurid and wonderful turns of the story even when - as here - the interactions have become less crisp and one of the principals frankly can't act. (More on that below.) Similarly, though I missed his debut run in Salome last season, Johannes Debus seems to be a bit of a find. His macro tempo and dynamics choices are pretty standard, but the care and space given to each phrase add up to quite a lot over the course of each evening.


*     *     *
The vocal star was the same for each lineup: Anita Hartig. The Romanian soprano was a disappointingly ordinary Susanna (though Fabio Luisi's detailed but emotionally weightless conducting didn't help) in a Figaro revival two seasons ago, but perhaps the vocal-emotional scale of the part was insufficient. Her Antonia - like her quick-vibrato sound, which seems a bit too pressured in the placid opening aria but expands gloriously as the act goes forward - becomes ever more electric as stakes and stresses increase. Limited by neither politesse nor scale of sound, Hartig renders Antonia's end more as tragic fulfillment than simple victimization. If there's a fault, it's that Hartig is so desperately sincere as Antonia that her Stella, at the end, seems wholly disconnected from these memories.

Also impressive were Erin Morley - whose characteristically deliberate manner works pretty well for Olympia - and Laurent Naouri - not as vocally weighty as some of his predecessors as the villains but with a compelling style in his person and phrasing. Oksana Volkova sang Hoffmann's last love interest Giulietta well enough without making any particular impression... which is also how I'd describe Christophe Mortagne's account of the four servants.

Those were the constants; Hoffmann and Nicklausse swapped for the alternate cast. Unfortunately, the better Hoffmann and better Nicklausse didn't sing together. Vittorio Grigolo - as in 2015 - is a significant plus, though not as much of one as his fame might suggest. There's an exciting quality to his midrange, and his relentless ardor brings something his successor here quite lacked. But while his phrasing is no longer just fragmentary chaos, the longer, legato-based lines aren't yet a whole; nor do more personalized sentiments than general happiness, unhappiness, or rage come through in his acting. So Hoffmann's outburst at the end of the prologue was terrific, but the rapt expressions of the poet in love aren't so rapt... and by the time Hoffmann's ardor has worn out and he's overcome by regret and despair there's almost nothing going on in Grigolo's portrayal.

Fortunately, at this point, the production and Debus have matters pretty well in hand. Unfortunately, it's where the flaws of the main-cast Nicklausse are also pushed to the fore. Irish newcomer Tara Erraught sings well enough and has the scale of voice to sound effectively at the Met (though it's by no means thunderous or overwhelming). But she's also the big weak link in this otherwise excellent revival. Her stage presence fluctuates between null - there's no boyishness, and she simply skips much of the stage business with the villains that makes the Muse an interestingly ambiguous (though not actually malicious) figure in this production - and clumsy sitcom actress. Even if Kate Lindsey's near-definitive physical account (she created the part and was Grigolo's Nicklausse in 2015) can't be expected of everyone, the mezzo has to show some thread of Nicklausse's journey as the over-watching Muse... or at least not work against its expression. Karine Deshayes, one of the other 2015 Nicklausse singers, offered a much better trade of voice for character, providing both a more luxuriant sound than Erraught and fewer off-putting tics.

The alternate Nicklausse this time, Geraldine Chavet, gave a performance very much in the Lindsey vein. In fact the stage business and manner was pretty much an exact reproduction of the 2009 premiere, suggesting that Erraught's elisions weren't the revival director's fault. Chavet also, unfortunately, had Lindsey's vocal-scale limitations - the sound is this close to too small for an effective lead singer here - and though she did pretty well with it most of the evening, Chavet really seemed to misjudge the necessary volume/force for her solo at the start of the Venice act and left that pretty much inaudible. Still, her Nicklausse over the course of the evening allowed the story to unfold much more interestingly than Erraught's did.

Yosep Kang, who made his house debut on the 18th, was unfortunately not so good as the alternate Hoffmann. He did sing the notes, but his fragmented, legato-deficient phrasing was actually worse than Grigolo's at the time of his inauspicious debut (he's improved a lot since) and suggested nothing so much as Jonas Kaufmann minus the latter's grand scale, unmistakeable dark timbre, and compelling energy. It was actually the latter that hurt this revival the most: without the ardent energy Grigolo and other Hoffmanns brought to the part the tension deflates except during the heroines' actual scenes. Kang did improve for the last part of the show, but even with Grigolo's imperfection there the balance was still much in the Italian's favor.

I'm sure there are parts that will better suit Erraught, but this version of her gives little to anticipate in possible future bookings here. Hartig, on the other hand, is sufficiently interesting that I'll probably go to one of her Bohemes next month.

What we do in the shadows

Perhaps it looked good via cinema, but David McVicar's new production of Norma was, in the house, a prime example of less-than-the-sum-of-its-parts, an overall framework that turned what could have been a landmark event into a somewhat deflating disappointment.  It's not all bad.  The production itself has numerous excellent touches, not least the moonlit rite that introduces Norma and "Casta Diva".  But the relentlessly narrow range of visual contrast and definition - moonlight to firelight, with the leads all dressed in dark shapeless outfits after that first ritual - obscures to the minds as much as to the eyes of the audience the individual subjectivity that should, as the defining feature of romantic opera - burn in glorious intensity throughout.

It seemed, oddly, designed for routine revival - to obscure the physically inert, perhaps unshapely singers likely to fill this show in the future (indeed, as soon as December).  But to hide Sondra Radvanovsky and Joyce DiDonato - whose arresting stage presences have been as notable as their virtuosity - in an endless gloom without even spotlights deflates the show in person as surely as bad sound compression seems to have deflated the moviecast.  (Anyone brought to the house by the striking photos of the leads in the posters plastered around the city is likely to have been disappointed.)

I'm honestly not sure whether the singing got better from opening night to last Tuesday or whether I tried more just to listen rather than take in the compromised dramatic whole.  More on that after Wednesday.  Going forward, I suppose that as Paule Constable is also lighting the new Cosi, we should be worried about that... though in this case it's surely McVicar's over-fondness for a "realistic" production texture (which previously weighed down his Anna Bolena that's most responsible.
Posted by JSU at 7:50 PM 1 comment: