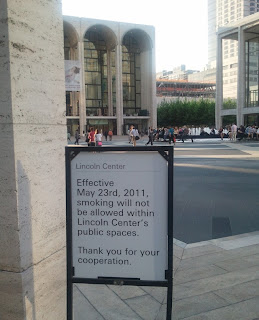 It's not quite as bad as one might imagine, though, at least for ABT season: the restaurant side of the Met outer balcony (the part visible in the center of this picture) has been roped off for an undignified but still-extant smoking zone.


*     *     *
More generally important has been the shifting policy this past Met Opera season concerning the informal ticket resale market. For many, many years ticketholders with an unusable seat have been able to find last-minute buyers by simply standing outside the box office doors, ticket(s) to one's chest for easy spotting. No gouging (the one rule that's always been enforced is the legal requirement that one can't charge above face value), no gross hawking, and a way to get some return besides an itemized US tax write-off for a late-broken plan.

Fall 2010 brought a rather dramatic change (though the measure had been tried on a temporary basis previously): ticketholders wishing to unload their seats were now shooed away from their traditional space and asked to go to the front of the plaza to make their sales. This was, in effect at least, an attempt to kill the market altogether. "The front" is, for one thing, a much larger space -- there are two glass-covered walkway entrances as well as the wide main Lincoln Center steps -- and the ability of any seller or buyer to find an appropriate counterpart in that wide windswept flow of humanity is there greatly reduced. For another thing, the plaza entrance space is and was the working area of the repellent bottom-feeder scalpers whose daily labor is to take advantage of those patrons who don't know that they may get much better prices (both for sale and purchase) from actual operagoers a little way closer to the entrance. These scalpers' horrific persons and racket makes the front no place for a decent person to unload an extra ticket.

Longstanding markets are not so easily squashed, though, and over the course of this last season it simply turned into a game of hide and seek, with the locus either moving one poster-display over to the center or simply remaining in the traditional before-the-box-office space until a guard came for his thankless task of shooing... which would be effective for maybe five minutes.

The Met would, of course, prefer returns and the consequent possibility of double-selling a seat, but this was about the worst time to step on the longstanding repeat patrons who are most of the sellers (and, in fact, buyers). By the end of the season, in a victory for common sense or inertia or both, enforcement of the new resale prohibition seemed to have ceased -- except, thankfully, on the scalpers, who keep mostly to the glass-covered walkways out front. We'll see if next season brings any change, for the better or worse. Best would be to run the bottom-feeders out of Lincoln Center altogether (one used to only see them around Carnegie Hall), since in fact the house specifically chased off the one reasonably civilized ticket pro (perhaps because of his apparent access to group sale extras?). Worst would be a reprise, perhaps more enthusiastic, of last fall.

Since my readers may not all be personally familiar with the local market, allow me to summarize the bottom line:


(1) Never sell or buy from the guys accosting pedestrians in front of Lincoln Center -- or, if they've invaded the usual market area, from anyone who doesn't look like he'd actually go to the opera himself (and yes, they're basically all men).
(2) If you file American taxes and itemize, remember you can get a full tax deduction for turning in your ticket any time up to curtain.
(3) If you wish to buy or sell at the last minute, find the appropriate spot -- usually in front of the box office -- and look for/hold up tickets to the chest.
(4) Don't expect to get face value on the most expensive seats, even at a fairly sold-out show.
(5) Don't expect the market to be particularly active more than 30 minutes before curtain.
(6) That woman with a sign asking for a (free) ticket? She's there literally every night.

A review post on May's three Met-season-closing Luisi events will follow soon, but it's past time to think about summer offerings. Restrictions, as in previous years: reasonable driving distance from NYC and no musical theater (with one exception I couldn't omit). Even within these limits there's a pretty good set of offerings one can take in before/instead of/as well as jetting off to Bayreuth, Salzburg, or Santa Fe.

Opera Company of Philadelphia's Phaedra (June 3-12 in Philadelphia)
After an excellent Rape of Lucretia in 2009, Tamara Mumford returns to Philadelphia for another 20th century mezzo lead, this one even more obscure: the American premiere of Hans Werner Henze's Phaedra. William Burden, the excellent Male Chorus in Lucretia, returns as Hippolyt; Met Council-winning countertenor Anthony Roth Costanzo is Artemis (!).

Wolf Trap's The Curious Women (June 17-25) and Tales of Hoffmann (August 5-13) (both in Vienna, VA)
The rarity this year is Wolf-Ferrari's Le donne curiose, not heard in the US since its 1912 Met debut.

The Princeton Festival's Rake's Progress (June 19 and 26 in Princeton, NJ)
Some previous shows have not been fully staged, but this one is, and is at McCarter's main stage (right by the Princeton train station, if you're interested)

Lincoln Center Festival's Magic Flute (July 5-17) and Selma Jezkova (July 29)
Peter Brook's take on Mozart first, then a Poul Rouders opera based on von Trier's movie "Dancer in the Dark". I'm pretty sure Rouders (unlike von Trier) hasn't declared himself a Nazi recently, but he's got a few months.

Opera New Jersey's Barber of Seville (July 9-23) and The Consul (July 16 and 24) (all in Princeton, NJ)
These shows are also on the McCarter main stage, but there are miscellaneous events elsewhere (check the site).

Bard SummerScape's Die Liebe der Danae (July 29-August 7)
Strauss' goodbye to opera, as I recently noted, has some of his greatest -- and more infrequently heard -- music. Leon Botstein, who presented a concert version of this rarity a decade ago (available on record), now uses his upstate festival to offer an even more elusive (in the US, anyway) full stage version. Meagan Miller in the title role seems promising enough, but the main vocal/expressive challenge is in the punishing high-heldenbaritone part of Jupiter, here in the hands of German regional veteran Carsten Wittmoser. I suppose it's pandering to the tri-state greying-hipster crowd that architect Rafael Viñoly is doing the sets, but at least the director isn't the guy who did Bard's MMA staging of Huguenots two years ago... Their task will be to give some dramatic fluidity to the nontheatrical Joseph Gregor's libretto, but absent some vocal or directorial disaster the music should carry the day.

City Opera's season ended a week ago, and this week's close of the Met Opera season means it's time for summer activities -- which, apart from ballet, are mostly outside of New York City proper. A preview post or two on that will follow.

Metropolitan Opera:
Walküre (M/SM), Ariadne (T/F), Orfeo (W/SE), Rigoletto (Th)
The 2010-2011 season closes with the Valkyrie moviecast Saturday at noon, followed by the annual evening anticlimax end -- this time a 9pm (!) Orfeo. (There is one more show at Carnegie the next day, however.) Incidentally, Lucic and Luisi are very good in Rigoletto, but the other two leads don't quite add up.

Carnegie Hall:
Dallas Symphony concert (W)
Met Orchestra concert (Sunday 3pm)
The Dallas Symphony performance is the New York premiere of Steven Stucky's oratorio rather oddly about LBJ ("August 4, 1964"). The Met-season-closing Orchestra concert features Natalie Dessay in a wide range of material -- including the taste of a great "might have been" (if her voice hadn't had issues), Berg's Lulu Suite. Luisi conducts for the still-not-quite-hale Levine.

OT:
Piano fans can hear Marc-Andre Hamelin at Carnegie (Zankel) on Wednesday or Simone Dinnerstein at the Met Museum on Friday. Both are playing some Schumann, but that may be about the only similarity...
Posted by JSU at 7:00 AM No comments: