I've been absent for a while, so let's go backwards.

The presence of superstar tenor turned embarrassingly amateur conductor turned hit-and-miss baritone Placido Domingo is no longer the most notable thing about a production. But perhaps he catalyzed what struck me so strongly on this night: the palpable attention, long familiar here but absent from shows I've seen this season, of the Met audience that recognized itself as such. The sounds and silences (and you can sense it best in the quiet) of a crowd sure in its tastes getting the excellent performance it craves and appreciates... that's something.

The excellence of the opera (and the straightforward & handsome production) was no surprise. But the drama enacted this time wasn't the same as in that memorable 2008 revival. There, all the singers shared the youthfully pessimistic spirit of this first Verdi/Piave collaboration. Here, the cast split perspectives. Angela Meade, whose fateful Met debut came while covering Sondra Radvanovsky in that run, doesn't actually do much with Elvira's tour-de-force opening solo. In fact, Meade seemed uncomfortable: not only with the vocal-technical hurdles -- though the coloratura was hardly clean and she had some noticeable dropped notes -- but even more with the range and unequivocal force of the emotional expression. But the rest of the night didn't put Elvira so front-and-center, and Meade did very well therein as an ensemble instrument for Levine. As such she doesn't (as Radvanovsky did) vocally rush forward with her suitors towards fate but provides the opposite sentiment: caution, (justified) fear of disaster, and the pain of one who values happiness. Meade is the bright, audible sound of normalcy that her suitors can't help but disrupt.

This time, it's the tenor who carries the main dark emotional charge of the piece. I wrote in the season preview that the revival's success would "largely depend on tenor Francesco's Meli's ability to survive the punishing title part", and so it's proved: for not only did he survive the revival opener, his plangent sound and go-for-broke Italianate expressiveness ensured the show's success. Meli has been moving deliberately into these middle-weight Verdi roles from the lighter end, and on this evidence the voice and spirit are already perfect fits.

Dmitry Belosselskiy was an excellent firm low-voiced counterpoint to Meli, matching the tenor in fire and giving an even darker contrast to Meade. Sadly, the most famous of the ensemble offered the least: whether from lack of practice in the part or lack of breath control due to age, Domingo couldn't navigate or string together Carlo's phrases with any musicality. Nor does his timbre now sound particularly familiar or individual, whether one recalls his tenor or prior baritone incarnations. His fame did assist his assumption of his character's (initially hidden) fame and command, but that's about it.

James Levine conducted this and the final night of Hoffmann back-to-back with no sign of mental overwork. In fact, this month's shows have been the closest to classic Levine I've seen since his return. This Ernani is probably the show of the season so far, and though after Friday's dress I expect much from Don Carlo tonight... well, the more Verdi the better.
Posted by JSU at 5:00 PM No comments: 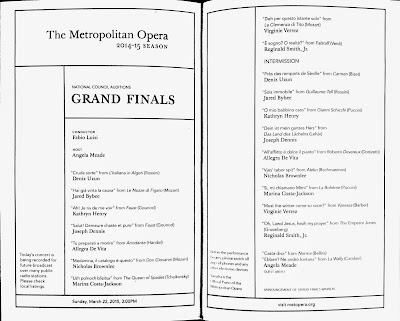 The program is above. Singers discussed below in order.

Deniz Uzun (mezzo, 26)
This German (by way of Indiana University) singer, like most of this year's lineup, showed a quite promisingly expressive timbre, solid from top to bottom (where she directed a number of her elaborations) with threads of quick vibrato. The performance, though, was a bit herky-jerky, both in body -- it seemed that most of the singers had decided to flap their limbs around on stage -- and, more worrisomely, in phrase. The Rossini just seemed uncoordinated, phrases going hither and thither, but the Carmen aria suggested something more deliberate and interesting... perhaps within her is a throwback to the dawn-of-recording exponents of wild phrasing. In either case, it didn't sit well with Luisi's cool and controlled accompaniment.

Jared Bybee (baritone, 28)
The outstanding singers of the past two Council Finals programs have been AVA students, so I was expecting much. But from the Californian's lean figure came a lean sound with little of note in the Count's aria besides a decent trill at the end. The Rossini was a much better listen -- perhaps it was nerves in his first selection?

Kathryn Henry (soprano, 22)
Like Uzun, the most appealing thing about Henry was her sound, which has a nice, again vibrato-borne timbre in its midrange. She was also rather more moderate in her presentation than the first two, and she can and did sing a lovely Puccini tune. But she's not fully developed (as one would expect at her age, though ten years ago an even younger Lisette Oropesa seemed already entirely herself), and the more various demands and moods of the Jewel Song seemed a bit much at this point: it was reasonably well sung, but not particularly coherent or glittering or thrillingly articulated.

Joseph Dennis (tenor, 30)
The Texan, apparently en route to joining the Vienna State Opera's ensemble, was one of the big crowd favorites... and no wonder, because his baby-spinto sound and strong high notes are pretty impressive even now. But he's not quite finished, with both too few colors (even adjusting for the different, more squillo-based presentation of a spinto sound vs. a more lyrical one) and too many (with stray colors creeping into some high notes, particularly in the Faust) for my unqualified liking.

Allegra De Vita (mezzo, 26)
I'm not quite sure what to say about De Vita: she didn't, I think, thrill in any particular way to demand the judges' prize, and yet nevertheless she may have been the most satisfying performer of the day. Her performances had a thorough coherence that the others mostly only touched.

Nicholas Brownlee (bass-baritone, 25)
Unlike the next finalist, Brownlee is not related to the current Met singer with the same last name. (Besides voice types, this one is tall and white, not short and black.) He was very much of everything -- expansive sound, bodily action to the point of hamminess, and a big presence on stage -- and in an undeniably effective way. One can't help but enjoy and pay attention to his singing, even while noting that he's overdoing it or that his Aleko aria, though presented in a big way, lacked the depth of feeling of, say, 2013 winner Brandon Cedel's. Brownlee seems to have a natural rapport with the audience that should serve him very well as his career moves along.

Marina Costa-Jackson (soprano, 27)
Younger sister to mezzo and Lindemann alum Ginger Costa-Jackson (and elder sister to a third singer, Miriam), this AVA student brought the house down with Lisa's last scene from the Queen of Spades. The broader elements of Costa-Jackson's performance were pretty astounding: a full-house-filling sound, dynamic range covering "really loud" as well as just "loud", a charged dramatic conception of the whole scene that's surprising in its intensity until one sees that she's just come off some Russian concerts with Hvorostovsky... The details weren't perfect -- in particular, the vibrato seems to get dangerously away from her on certain soft high notes -- and I'm not sure why she sang Mimi, but the ability to work on the emotional and sonic scale of this Tchaikovsky is near priceless.

Virginie Verrez (mezzo, 26)
I'd have been surprised if the mostly-Met judging panel had not selected a singer they'd already accepted into the Lindemann program as winner in the company's own competition... but in any event, she needed no special consideration. Verrez is a super find for the house: definitely a lyric mezzo, but one whose voice carries and expands in the big space as if it were the most natural place in the world. The basic sound reminded me a lot of Susan Graham's, and though Verrez's Sesto wasn't at the 1988 Council winner's exalted level, the degree of concentration the Juilliard student already shows in these weighty arias suggests she might (might) get there.

Reginald Smith, Jr. (baritone, 26)
The barrel-chested Atlantan (by way of HGO's studio) was another crowd favorite, singing with commendable intensity in both Ford's famous aria from Falstaff and the lesser-known one from the (Met-premiered) opera after O'Neill's play. But in contrast to that of Verrez, Smith's sound had substantially less impact in the house than one would expect given his size and timbre and evident vocal strength.


*     *     *
The judges -- again numerous, this time four from the Met, one from SFO, one from Santa Fe, and Francesca Zambello from everywhere -- picked Dennis, Brownlee, Costa-Jackson, Verrez, and Smith as winners. This was basically fair, though I'd probably have only picked the former four (and if pressed for five, might have given it to De Vita instead of Smith).

During deliberations, we got a Casta Diva (no cabaletta) from Angela Meade that quite outdid the ones from her actual Norma performances last season (and her solos from Ernani on Friday, which is nevertheless the show of the season so far). It helps not to have to conserve energy for further hours' singing, I suppose...

Fabio Luisi drew lovely sounds from the orchestra, but I've never seen a Council Finals conductor zig when the singer expected him to zag so many times in an afternoon: I think almost every contestant had that happen during the first set of arias.
Posted by JSU at 9:10 AM No comments: