Love and the City

Someday an overly clever General Manager of the Met may try to scrap the production of La Boheme that Franco Zeffirelli opened twenty-five Decembers ago. Its replacement may be more sleek, more up-to-date or "intimate", and perhaps rather more critically praised -- but will nevertheless be a mistake. For despite any nonsense he's perpetrated since (including his part in the current La Scala silliness), this particular Zeffirelli effort is a sort of perfection, and really (with periodic "refurbishment") ought to outlive us all.

The argument that all the stuff onstage (including, per a recent snooty review, "virtually all the milling citizens of Paris" in Act 2) dwarfs the principals misjudges, I think, the effect. In this Boheme (let's not speak of his Met Traviata), the abundant scenery -- human and otherwise -- is all recognizably of a piece: an old Paris, as grandly indifferent to the characters' woes as a Poussin landscape. The contrast -- made not least by Puccini (a master of background touches) himself -- broadens and strengthens the story's power, not least among the opera-novice date set that make up so much of the audience at these revivals. In love, we are all helpless, and it's no small pleasure to imagine ourselves bare of all but love, loss, and jealousy, in a city as recognizably overpowering as the real New York. For a while, anyway. 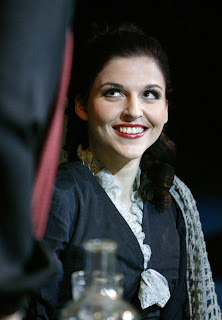 The non-enthusiast audience was yet enthusiastic throughout: more so than I was, in fact, for the rather middling performance we all saw. The best moments belonged to soprano Maija Kovalevska (pictured left, in a non-Met Boheme), in only her third Met performance. She was engaged for this debut at a fairly late date when Cristina Gallardo-Domas, perhaps worn out from Butterfly, cancelled this month's run of Mimis.

Kovalevska is from Latvia -- a country known of late for models -- and though she may not photograph as a stunner, on stage she cuts a gorgeous figure, perhaps the most striking of this season's performers'. That isn't the most important thing, but I don't think any reviewer's yet noted it. As impressive was the delicately inner-felt "Donde lieta" she sang in Act 3 -- probably the highlight of the evening -- and her Act 4 death scene.

Mimi's most famous moment, of course, comes in Act 1. So does her lover Rodolfo's. But their two arias and the duet ("O soave fanciulla") that follows may not have shown much, for as sensitively as conductor Steven Crawford shaped phrases and textures, so carelessly did he blast the orchestral volume all evening. Mimi fights the orchestra more at the beginning, and before its assault Kovalevska's focused sound had no trouble being heard, but made no impression at climaxes and an indefinite one overall. Whether she (or Villazon, who had much the same problem) could do better with a more balanced accompaniment is to be seen. I wouldn't mind hearing her again.

Anna Samuil, the Musetta here, also debuted in this run. Russian and apparently a former orchestral violinist, Samuil showed an unmissable "Slavic" edge to her voice absent in her former-Soviet colleage's. She did a pretty good job in her big aria, but I wasn't too taken with it all.

*     *     *
Rolando Villazón is a much more known quantity. His breath and boundless enthusiasm make him, respectively, interesting and beloved. (Saturday's Rigoletto broadcast -- in which he didn't sing -- showed off the latter: as quiz host, he was entirely likeable and charming, even joking about his "Che gelida manina" transposition.) How much his periodic inability to make an impression -- notably in his Act 1 showpieces -- was the fault of his weak (if easily sustained) top notes and how much was Crawford drowning him out, I'm not sure. That people complained of this even under Domingo's baton (such as it is) has me wondering, but he's still a plus.

Interestingly, as an Opera-L poster observes, Villazon, Giuseppe Filianoti, and the newest tenor sensation Joseph Calleja were all finalists in Domingo's Operalia competition in the same year -- 1999. (But compare their ages!)
Posted by JSU at 1:02 AM