Massenet's Manon never makes it out of France: she dies on the road to Le Havre, before she can be deported. Her opera, too, remains essentially French, its passions ever circumscribed by the play of social expectations. (Prevost's original novel is more extreme in its events but as much, if not more, wrapped up in the French context and mores -- and incidentally, the lovers don't get more than six miles outside of newly-founded New Orleans.) But Puccini's Manon Lescaut makes it not only over the sea but thereby, in the fourth act, beyond human society altogether. The effect is perhaps not even as "Italian" as it is modern -- at least as remarkably so as the Wagnerian influence on the score.

Puccini and his gaggle of librettists and script doctors -- who here assembled perhaps (along with La Forza del Destino) the most unfairly-maligned libretto in the canon -- set up the contrast of this "desert" finale with an extraordinary set of three preceding acts. They do not, of course, tell a thorough story (only Acts II and III straightforwardly follow each other, and it's in this least eventful gap that Puccini put the opera's intermezzo). But each enacts the characteristic action of the opera (and maybe of opera itself) -- Manon becoming, as she needs, the center of an attentive crowd -- in ever-less-innocent (and ever-more-striking) form. Puccini repeatedly and memorably juxtaposes the soloists' own expressions (particularly Manon's) with a watchful chorus' background. He of course used the chorus in other memorable ensembles later, but never as repeatedly and singlemindedly as for Manon Lescaut. When it's wholly gone, at the end, the absence is stunning, almost incomprehensible: in a sense, that's the true (and fatal) desert. 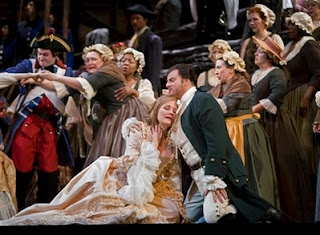 True to his Italian roots and stated intentions, Puccini offers a more impassioned account of the Manon story, showing her almost exclusively in extremis -- and with few of the subtle character touches she gets in Massenet's first few acts. But there's an interesting distance, too, brought by the thematically repetitive nature of the action. Again and again Des Grieux's jealous love meets (with Lescaut in between) the group attention on Manon, and whether nostalgic and sentimental (Act I), brittle and glittering (Act II), or movingly agonized (Act III, one of Puccini's greatest dramatic inspirations), none of the particular arrangements holds exclusive truth. Even before the solitary finale, we are far not only from the unproblematic (if not problem-free) existence of Massenet's Manon in her France but the straightforwardness of Italian verisimo. If Puccini's heroine is less subtly drawn, she and her world get more dimensions.
Posted by JSU at 1:14 PM