La Rondine doesn't add up to much because it doesn't go very far: Puccini began by emulating Viennese operetta, wound up referencing a bunch of other famous shows, and never, unfortunately, let himself veer too far from stock genre elements. As the opera's characters ever threaten to disappear into their own cardboard cutouts, so the tragic and truly dramatic undercurrents in music and story never quite emerge, always returned by Puccini to the piece's tide of slightly ironic wistfulness.

But for all that, the Met's current production -- from Toulouse and London, and most recently seen in San Francisco -- is almost irresistible. The cast is right: the lighter, clearer voices of debuting tenor (and 2001 Cardiff winner) Marius Brenciu and Lindemann grad (and 2005 Met Council Finals winner) Lisette Oropesa are a good foil for the main tenor-soprano couple, who themselves are in fine shape. This time Roberto Alagna takes the vocal prize (or, to be specific given the couple's historically mercurial turns of form, he did on Saturday), singing with excitingly ardent tone throughout. His wife Angela Gheorghiu, for whom this production has been touring around the world -- with and without her husband -- sounds good but didn't have the sort of physical impact Puccini might have imagined from his intended first Magda: the paint-peelingly loud Rosa Raisa. (Though hearing Raisa's unilluminating work on record has one wondering if this choice was a sort of joke.) At any rate, when this quartet harmonizes in the unimpeachable centerpiece of the opera -- its second-act drinking song -- Puccini's greatness is given a worthy airing.

*     *     *
Though her husband may sound the best, Gheorghiu makes the show -- perhaps even more than any predecessors. 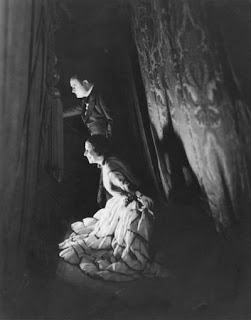 La Rondine is yet another work associated here with Lucrezia Bori, who besides being the Met's most prolific Violetta and perhaps foremost Mimi gave La Rondine's American premiere here (with Beniamino Gigli, left) in 1928 -- an event of which one may see photos and reviews here and a small related piece here. Bori also spread Rondine to San Francisco and Ravinia, and a 1934 Ravinia Festival broadcast of Act II (which I may post) survives. Back at the Met, the piece was revived for Bori in 1936 -- her farewell season -- after which it sat unheard until the current production debuted here this New Year's Eve.

Bori, last great scion of the Borgias, was personally sophisticated enough to become a Met board member and later chair of the Metropolitan Opera Guild, but by all accounts (sound and text) seems to have had a delicate and "adorable" (as one 1928 reviewer put it) and unaffectedly communicative manner that let worldliness sit lightly on her onstage. And so she was also the renowned Manon (who, at least in Massenet's version, must be maximally and uncalculatedly charming exactly as she's selling out love for wealth) that Gheorgiu is not.

But Magda, the heroine of La Rondine, is not Mimi, the self-effacing bohemian who loves a youthful love unto death (although Rodolfo does call Mimi a swallow in Boheme's last act). Magda's a woman who, having chosen rich but emotionally cool accomodation, dreams of and then plays at young passion, becoming "Paulette" to win the young newcomer from the country. With Gheorghiu there is no question of Magda being, at bottom, more than transiently Paulette: she remains the fierce and clever and spotlight-grabbing soprano world stages have long seen. But in playing a woman who herself plays a more innocent character, Gheorghiu layers an interesting element of herself into the show. She takes lively and evident pleasure in the "Paulette" bits -- does this double or merely portray the pleasure Magda herself takes? I don't know how far back she originally left her own naive romantic abandon, but it's fascinating to watch Gheorghiu grab again at it -- ostensibly on her character's behalf -- moment-by-moment in her voice and body, and not just via the path of the plot. The generally indelible effort and calculation of her portrayals show still in her Magda but become, given the situation, the natural truths of that character: no matter what she is the worldly Magda, not Paulette, and Paulette's bliss can't be hers for long. No more-straightforwardly-charming soprano could offer this wrinkle... And perhaps such an opportunity is part of why Gheorghiu's championed this particular obscure Puccini opera.

*     *     *
Ezio Frigerio's sets for Nicolas Joël's production are probably its most striking feature. The art deco columns and glass of Acts I and III are quite nice, but the disco cafeteria of Act II was a serious error. What romance is in a place where one can practically smell the institutional floor cleaner?

Incidentally, despite Puccini's intention to be "more entertaining" and "more organic" than Strauss' Rosenkavalier, for a shamelessly light one-off I'd take Intermezzo over La Rondine any day. Although... if the language fit, Christine could be a great role for Gheorghiu.
Posted by JSU at 9:00 AM