The sleep of reason 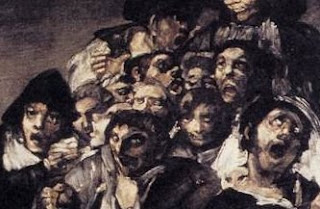 The theme of David McVicar's excellent new Met Trovatore is Goya, and it fits just right: not for any particular recollection of the Napoleonic campaigns' Spanish brutalities, but the recurring outbreaks (and threats thereof) of the odd and monstrous in the painter's work. With this image as the evening's curtain, the stage was properly set.

Verdi's much-derided opera has brothers, lovers, and a mother, but lacks one of his most persistent figures: the father. Whether divided and beset as in Rigoletto (both he and Monterone), stylish and daring (and metaphorical) as in Ballo, all-too-solid as in Traviata, or -- well, one could go on indefinitely -- the father sets the tone for his opera's world. Here, in Trovatore's story, he is wholly absent: dead of heartbreak, overthrown (in a sense) long ago by gypsy machinations. And so too in the piece itself: gone is the responsible worldly figure that makes our daylight world what it is -- ordered; rationally explainable and advancing; free from witchcraft, ghosts, and meaningful coincidence. But it is not just the shadowier stuff that he keeps off, but the oldest magics: rhythm - story - sacrifice. So here Verdi unleashes them all as no other could -- and too few since have at all dared to try -- for a nap-of-reason draught more intoxicating even than its near-contemporary Tristan's.

*     *     *
The joy of story: that's what the production so gets right. Ferrando's ghost story -- superbly sung by Korean bass Kwangchul Youn -- kicks things off, and the way it visibly gets to the chorus (who also sound terrific) perfectly sets the tone. Then come Leonora's romance tale-aria ("Tacea la notte") -- in which McVicar perhaps goes further than he has to by having Sondra Radvanovsky writhe around the floor, but who cares? -- and Azucena's obsessive revenge story ("Strida la vampa"). All take such relish in the elemental narratives (free from the later-in-origin obligations of fact, plausibility, and literal truth) with which they begin that not only onstage listeners but those in the audience are sucked wholeheartedly into this primal world.

The rest is mostly up to the performers. Conductor Gianandrea Noseda seems noticeably improved in Verdi since an incoherent run in Forza three years ago and some up-and-down Ballos last season: perhaps it's the extra prep time of a new production? Whatever the cause, he doesn't let Verdi down, doing a nice crisp job with the infectious rhythms that are so much of the piece's thrill.

First among the singers was Radvanovsky: the immense ovation she got for "D'amor sull'ali rosee" said it all. Her instrument is, as ever, a marvel, and she sang a stunning version of Leonora's fourth-act aria even four years back, but I'm impressed with what working in a premiere with a good stage director did for her. Though she's been, at times, a bit unfocused on stage and in character in recent revivals, there was none of that here. She not only sang well but sold the character throughout.

In fact, this seemed to be a uniform virtue across the cast. It is, I suspect, to McVicar's credit that he not only had a definite and full-blooded sense of the characters and their interactions (though having Manrico walk off from Leonora just to engage di Luna in a staring contest while she's dying was unnecessary) but got the singers inside these notions. Marcelo Alvarez, for example, was every bit the confused, headstrong, not-long-for-the-world man Manrico is, while Dmitri Hvorostovsky was not just inspiredly cast but well-encouraged to be the brooding, obsessively desirous nobleman (and convincing brother to Manrico) that "Il balen" shows di Luna to be, not the blustering lech of tradition. This was, I think, more important to the show's success than the vagaries of vocal form on the particular night.

Both sang well, in any case. Alvarez still has his lyric, sympathetic way with a phrase, though the high notes are not his strength. He finessed most of them with a lighter attack, perhaps saving up for the one note for which far too much of the audience judges a Manrico: that big high blast (C if not transposed, but usually -- as here, I think -- a B) at the end of "Di quella pira" (in which he didn't take the repeat). He did hold that forever, mind you, even managing a second B on the last, oft-omitted syllable. More characteristic was "Ah si, ben mio" before this: he only touched the high note, but showed an affecting grace throughout and a creditable slow-motion approximation of a trill.

Hvorostovsky sounded much more comfortable as a Verdian than in Ballo a season ago. I found his casting in that a compromise, but got no such sense of that here: di Luna's big solo is, after all, his most lyric moment, and if he can't outshout Radvanovsky in ensembles, no one else around can either.

Finally, Dolora Zajick's Azucena is a long- and much-admired role, and if her top is fraying with age, it's added a bit of human vulnerability to the assumption.

*     *     *
After the show, one may go back to laughing Il Trovatore off as silly, or implausible, or gauche. We do, after all, live in reason's world, and its holidays can't last long. But that's neither the whole truth nor -- in a presentation like this -- the important one.
Posted by JSU at 6:40 PM