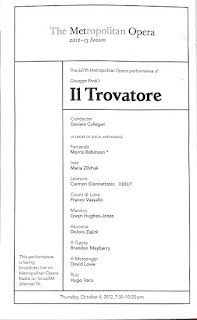 The premiere of McVicar's Trovatore at the Met had big stars; this revival lacked them, to the point of serious box office impairment. But the result this time reflected pretty well on the standards of the house even on lesser-name evenings.

Most impressive may have been baritone Franco Vassallo. I was decidedly unimpressed by his Belcore four seasons back, but his di Luna presented him in a totally different light. In fact, between his naturally robust sound, straightforward engagement in the character's villainy, and facility for both the lyric and declamatory sides of his music, Vassallo may have been the best di Luna I've seen in this production, outdoing both Hvorostovsky (intense but vocally taxed) and Lucic (alternately too lyric and not lyric enough).

Welsh tenor Gwyn Hughes Jones and Italian soprano Carmen Giannattasio had, depending on how you cared to look at it, either complementary strengths or complementary weaknesses. Jones gave basically a brighter-voiced version of Marcelo Alvarez's production-opening performance: intensely satisfying in the lyric and conversational portions of the role (thanks to a feel for the Verdian phrase that also served him well in ensembles), but lacking at climaxes. For Alvarez these punctuating high notes weren't easily reached; for Jones they just lacked force, particularly compared to his partners. How I would have liked him to break from expectation and sing both verses of "Di quella pira", giving pleasure more in the phrasing than in the obligatory high note... instead, of course, he sang one hasty verse before an impressively long but unimpressive-sounding high-note finish, the tone of which actually got away from him at the end.

Giannattasio does not lack for volume or high-note resonance: in fact her voice may rival Sondra Radvanovsky's wondrous instrument in natural scale. Just hearing her pop off big ensemble-capping high notes is a pleasure... but what leads up to that point is less exciting. She is not quite finished, both vocally (not entirely even in sound from top to bottom, still -- like most young singers -- unwilling to use chest voice) and musically, where she really could not compare to Jones. ("D'amor sull'ali rosee" was quite spoiled by her letting the end of each phrase sag.) The raw material for an excellent Verdi soprano is certainly there: besides the size and volume, she has a natural liquid flexibility that makes the cabalettas natural fodder. But she won Operalia a decade ago, has had major engagements for years and years, and though 34 isn't old, it's old enough to wonder if how and when she might make the last, oh-so-important refinements to turn her from a case of infuriatingly underutilized potential into a major and indispensable star.

Though she was, I believe, scheduled to debut the first week, this second performance of Trovatore turned out to be Gianattasio's debut -- perhaps this (or whatever caused the initial cancellation) affected her performance? In any case she seemed quite moved at her very positive curtain call reception (though perhaps she's a better actress in real life than Paula Williams' revival stage direction -- which put Gianattasio through McVicar's familiar postures for Leonora but had/let her recast them as hesitant instead of decisive -- let her express)...

Dolora Zajick of course carries over not only from the premiere of this production but from many years of false starts before that when casting anyone but Azucena properly seemed unlikely. The 2009 premiere found her showing, perhaps for the first time, some age: this revival finds her having adapted well to the years' changes. Her singing is again clear throughout, with no fraying tone to be heard, and if it's lightened a bit on top, the chest still hits with massive force.

Morris Robinson is a forceful -- if not dramatically onrushing -- Ferrando. Daniele Callegari conducts with a nice overall sweep and some fine ideas that may come to fruition later in the run -- when the ensemble hiccups that popped up in the show's second half will presumably have been exorcised. This same basic cast, with Chinese soprano Guanqun Yu in place of Giannattasio, has a few more peformances this month. Certainly worth catching.


*     *     *
Every good performance, like this one, convinces me a bit more that Il Trovatore is the most indispensable of operas. As I wrote after the premiere,

Verdi's much-derided opera has brothers, lovers, and a mother, but lacks one of his most persistent figures: the father. Whether divided and beset as in Rigoletto (both he and Monterone), stylish and daring (and metaphorical) as in Ballo, all-too-solid as in Traviata, or -- well, one could go on indefinitely -- the father sets the tone for his opera's world. Here, in Trovatore's story, he is wholly absent: dead of heartbreak, overthrown (in a sense) long ago by gypsy machinations. And so too in the piece itself: gone is the responsible worldly figure that makes our daylight world what it is -- ordered; rationally explainable and advancing; free from witchcraft, ghosts, and meaningful coincidence. But it is not just the shadowier stuff that he keeps off, but the oldest magics: rhythm - story - sacrifice. So here Verdi unleashes them all as no other could -- and too few since have at all dared to try -- for a nap-of-reason draught more intoxicating even than its near-contemporary Tristan's.

An art incapable of such a potent, primeval draught seems hardly worth the trouble.
Posted by JSU at 8:07 AM