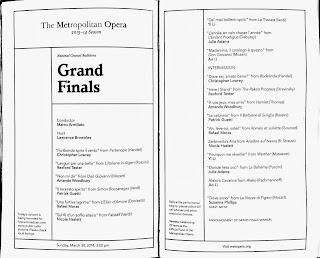 The program is above. I'll discuss the singers in order.

Christopher Lowrey (countertenor, 29)
The Brown- and British-trained Lowrey made a decidedly flat impression in the Partenope selection. Despite the acoustically friendly wood backing behind the singers and what seemed like particular efforts by Armiliato to keep the orchestra down, Lowrey's voice just didn't sound out well over the orchestra. Divisions, phrase, and the rest were unobjectionable but also undistinguished. Lowrey did much better in the slow Rodelinda bit, though the sound was still a bit cloudy. Sort of a trill.

Rexford Tester (tenor, 24)
Great name, and in contrast to Lowrey he did sound clearly into the house, but the well-defined sound and focus of his lightish-lyric instrument was the only thing I particularly liked from Tester. The rapid coloratura bits weren't quite on pitch in the Rossini... this wasn't an issue in the Stravinsky, but in that one he showed his current limitations in force versus the busier orchestra.

Amanda Woodbury (soprano, 25)
In Donna Anna's scene the Kentuckian showed all the elements of a successful big-house dramatic coloratura of the lighter sort -- breath, all the notes, enough steel in the sound to carry well, sort of a trill -- but didn't put them together into much of an overall performance. Perhaps she, like the other singers to this point, was nervous? In the second half Woodbury scored a huge and hugely unexpected success with Ophelia's Mad Scene: trills for days, dramatic clarity, and an even more impressive coloratura display. (It seems petty to note that she went through a few different high note productions in the intro here before settling into a nicely integrated sound by the end.) I'm very curious as to what she'll end up actually singing/turning into.

Patrick Guetti (bass, 26)
!!!!!!!!!!!!!!!!!!!!!!!!!!!!!!!!!!!!!!
What, you need words? Like Sydney Mancasola last year, the most obvious winner was an AVA singer, who in this case already has a bass instrument as full-limbed as he is -- not to mention an already-developed sense of how to use its full dynamic range. The Met could drop Guetti into a Simon Boccanegra revival tomorrow and his Fiesco would not embarrass its predecessors (most recently James Morris and Ferrucio Furlanetto). And he's comfortable out there, having way more fun as Basilio than you'd expect at a pressure-packed event like this. Incidentally, Guetti showed both impressive low-note and high-note climaxes in the respective pieces.

Rafael Moras (tenor, 26)
I liked the Texan's basic clear open coversational sound, but he seemed to go out of tune and was overphrasing in the Donizetti. As Romeo the phrasing was better, but pitch issues remained.

Nicole Haslett (soprano, 25)
The local (NJ by way of NYU and the Manhattan School of Music) soprano was one of the most impressive in the first round, where she sounded more than a little like the Met's recent wonderful Nanetta, 2005 winner Lisette Oropesa. But the rhythmic glitch Haslett quickly got over to start the Verdi turned into full-blown recurring imprecision in the Strauss, which was probably a poor choice anyway: it's really hard to just launch into the aria without the recit (not sure whether this was her idea or the judges' requirement), and she doesn't really have the trills or trick high notes Zerbinetta requires.

Yi Li (tenor, 29)
This first of two Chinese singers presented a stronger, larger-scale sound than the two other tenors', but it was also unremittingly... strong and effortful-sounding despite his periodic efforts to lighten it for lyric effect and contrast. His less-than-great legato didn't help. The Traviata worked anyway, because of Verdi's basic rhythmic regularity, but the Werther aria really highlighted his less appealing points.

Julie Adams (soprano, 26)
The soon-to-be-Merola singer brought the only real rarity of the afternoon, an aria (the mother's) from Debussy's one-act student piece on the Prodigal Son. Adams actually seems to have done a production of the work already in school, but it showed off well her dramatic concentration and the way both her phrasing and sound can shift seamlessly between gleaming focus and more languid suspension. Mimi's familiar third-act-of-Boheme aria was fantastic, one single long moment of character... as it should be.

Ao Li (bass-baritone, 26)
I was and am of two minds about this younger Chinese singer (by way of San Francisco Opera). On the one hand, he was one of the stand-outs on the performing side of this lineup. Musically he shapes lines strongly, has very nice diction, and uses the words -- both in Italian and in Russian -- terrifically to enhance the effect of his phrases and phrase-turns. He's a really enthusiastic actor, going for it perhaps a bit too hammily as Leporello but making the Aleko scene more dramatically engaging than both of last year's attempts combined. On the other hand, I'm not sure the actual size and quality of his voice matches his ability to use it... it's certainly pleasant, but enough to carry him to a big career? Not sure.


*     *     *
Woodbury, Guetti, Yi Li, Adams, and Ao Li were picked as winners by a larger-than-usual judging lineup (four Met people plus folks from SFO, Utah Opera, and Houston). (Again like last year, the most obvious winner -- Guetti this time, Mancasola then -- was left hanging as the last one to be announced.) This seems mostly fair -- I'd probably have only picked Woodbury, Guetti, and Adams, but Ao Li certainly did well. Yi Li seems like the Blake Bortles of this Council Finals -- a big-voiced prospect who may or may not get his stuff together. (The Met loves this sort of project, though.)

Who knows, though, how anyone will develop in the full-staged-operas phase of a career? Perhaps one of the Regional winners who wasn't even picked for this Finals round will turn out to be the biggest star... though I don't see how Guetti could miss.