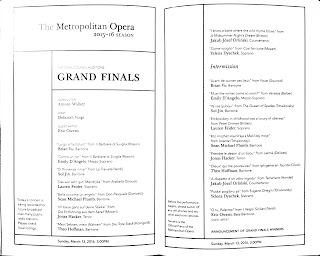 A pretty well-developed group this year: though only a few stood out, none did anything really objectionable either. Keep that in mind as you read the comments below.

Brian Vu (baritone, 26)
The first of four (!) baritones gamely kicked the show off with an energetically phrased and acted Largo al factotum. His focused, dark lyric sound registered well in the house, but Valentin's aria showed the still-somewhat-basic state of his (non-comic) interpretations.

Emily D'Angelo (mezzo, 21)
The most notable voice of the afternoon was this young Canadian lyric mezzo's: just hearing her clear, slightly-rippling sound actually gave me gooseflesh. Comfortable on stage, D'Angelo registered both the comic contrasts of Rosina's music lesson and the overheated seriousness of Erika's question with equal aplomb. She's still young, and the extreme ends of her range might do with more development, but D'Angelo seems already to know (and communicate) - musically - who she is. Let's hope the magic in her tone remains as her career launches.

Sol Jin (baritone, 30)
The second baritone and first Merola singer was, as the only thirty-year-old in this young group, a bit of a ringer. The Korean hasn't wasted those years, either: his interpretive faculty is hugely developed. Actually, at the start it seemed perhaps to have been too developed, as Jin let his emotional-scenic conception of Di provenza get in the way of its musical shape (and even, at some phrase ends, pitches). But he did build to a magnificent climax, and eased any concerns with a barn-burner of a sing through Yeletsky's aria. Jin's sound, though not quite a match for, say, Peter Mattei's in 2011, is quite strong enough for his interpretive authority to cast its spell.

Lauren Feider (soprano, 23)
I like Feider's basic sound - medium-weight, focused, and (when finished) pretty versatile - but she's not a finished product. She negotiated the difficult hurdles of the Strauss pretty well (though not with perfect uniformity), and showed a bit of warmth in the Britten, but what Feider didn't manage was to show much of an interpretive perspective in the process. Also, she was one of the less comfortable on stage and in her physical presence.

Sean Michael Plumb (baritone, 24)
Plumb, a Curtis Institute student and the third baritone, had the most naturally expansive sound of the baritone group, making for an easy, well-sung account of the Donizetti. The Tchaikovsky was probably a bit too heroically aggressive for him at this point, though he may grow into it.

Jonas Hacker (tenor, 27)
Despite doing many things correctly and showing a nice breath, this AVA singer's instrument seemed, at this point, too small-scale to work properly at the Met. There was just too much effortfulness in Hacker's sound here, especially on top, and he was therefore unable to convey much overall shape or idea.

Theo Hoffmann (baritone, 22)
For this local (Juilliard) product and final baritone of the day, I had the same impression as for Hacker - insufficient vocal scale to make either the delicacy of the Korngold or the intensity of the Gluck really tell in the big house. Hoffmann is young, though, so who knows what may come.

Jakub Jozef Orlinski (countertenor, 25)
I found the Pole-by-way-of-Juilliard's singing rather monochrome, as countertenors characteristically are, but also surprisingly labored in the Handel's coloratura. Home-team enthusiasm from the crowd notwithstanding, I found Orlinski quite ordinary compared to 2012 winner Andrey Nemzer.

Yelena Dyachek (soprano, 24)
This Ukrainian by way of California was entirely trained in the USA, so I probably shouldn't call the wide vibrato that mars too many of her notes "Eastern European"... Dyachek, like Feider but unlike her fellow Merola singer Jin, is a work in progress. She has the largest-scale voice of the women (and perhaps of everyone here), and it's not really tamed - different sounds and productions came out at various points, especially in the Mozart. (Interestingly, the best parts of that for her were the tricky coloratura passages.) The Tchaikovsky, unsurprisingly, was much more natural, and showed her voice in the best light. There are still seams, though, and a long way to go before the voice is whole and wholly nice to hear.


*     *     *
The judges - six from the Met, three from other companies - picked D'Angelo, Jin, Plumb, Orlinski, and Dyachek as winners. A friend joked at intermission that Orlinski would win no matter what, as countertenor finalists always do... unfortunately, this was correct. The rest of the choices were fair. As in previous years, the obvious winner(s) - here D'Angelo and Jin - were kept in suspense until the end: after Plumb, Dyachek, and Orlinski were announced, hostess Deborah Voigt miscounted the remaining winners (saying one instead of two) before making Steve Harvey jokes with guest singer Eric Owens. Amusing, I suppose, unless you're waiting in the wings with your heart beating out of your chest!

Antony Walker accompanied admirably.
Posted by JSU at 8:45 AM