...and starring Fran Drescher as Urkel 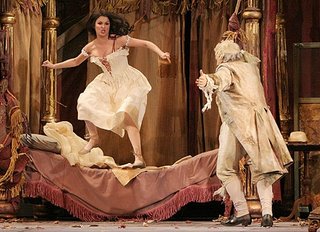 The official "news" from last night's Don Pasquale premiere is surely of its ecstatic reception, and the unexpected pull-out of Juan Diego Flórez before Act III (followed by the successful substitution of Barry Banks). My contrarian thought was more like this: someone has to tell Anna Netrebko that she's not nearly as irresistible as she thinks she is.

With the unfortunate encouragement of Otto Schenk's directorial crew, Netrebko spends her entire stage time flouncing, flapping, and slinking around in a way having very little to do with her character and rather too much with the out-of-control sitcom sidekick archetype. This is well and good when her character is "in character" as Sofronia, but Netrebko makes little distinction. It's the same schtick from beginning to the breaking-the-fourth-wall end.

Vocally one can't argue with the control she shows of her instrument -- how she gets it to jump through hoops on command -- but again it's impossible not to notice how thick and unyouthful the basic sound's already become. Still, this part was on the whole commendable.

The trick with Donizetti's opera is that it can come off as unpleasantly cruel, and may actually be that way. To offset this, houses have long cast personally charming singers as Norina (including, at the Met, the greatest of them -- Lucrezia Bori) and Ernesto. Florez certainly held up his end, singing appealingly (if with a bit of forcing in Act II) before his sudden withdrawal; Banks, too, deputized nicely for "Comè gentil". From the past we know Netrebko's not without charms, but she overplays Norina here so as to make one wonder how Ernesto could have apparently real feelings for such...

But the production as a whole emphasizes the cartoony, sitcom aspect of Don Pasquale and downplays the undercurrent of feeling. Simone Alaimo sings this title role very well, but his emotions are more a tic than any sort of real Falstaffian outburst. Who comes off best? Mariusz Kwiecien, who sounds absolutely amazing (again).

Maybe I'll like it more next time. Now if you'll pardon me, I have to rush to the matinee of Fidelio.