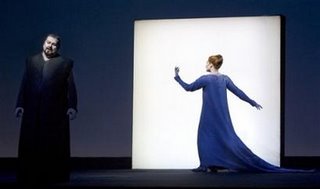 I was living elsewhere on the east coast in 1998, so when a friend told me that Karita Mattila had really made something of Elsa in the fall's Robert Wilson Lohengrin revival, I still passed. I'd been at the production's infamous premiere that March, and though I didn't hate it enough to boo with the rest of the crowd, enough of it struck me as agonizingly silly to make quick reprise doubtful. Mattila, too -- though she had turned the corner years before -- I associated with her prior incarnation, that well-schooled but unexciting soprano who'd graced the stage for the dozen years after Cardiff.

So I can't say what happened seven years ago. But last night's likely even more remarkable: Mattila and company have made that notable flop of the Volpe era into its last great success.

How much of the original remains, I don't know. (No new assistant directors or the like are listed in the program.) As I recall, Wilson intended the poses and wavy hand movements to be not merely anti-naturalistic but actually alienating. This plus the austere, static, and almost color-free set design were deadly in the hands of the premiere's mostly stand-and-sing cast, for whom in-mood sets and gestures are necessary to buttress sonic illusion.

For this cast, though -- most of all Mattila and debuting soprano Luana DeVol -- the distancing and tortuous poses are (as here revived) near-ideal frames. They isolate and resist, but do not (again, as here revived) bar nuances of physical response. In fact the resistance encourages them, dares each performer to continuously push back -- vocally and fine-gesturally -- against this formal tether. The result is the densest performance I can recall; so much happens in such a small space, at an emotional pitch heightened by the called-for control. Just to see Mattila's arms in Act 2 is more than the entirety of Schenk's Don Pasquale (or, indeed, most of his Ring...); the whole is more even than her work in other stagings where her engagement floats free, or comes linked just to climaxes. And such dense concentration caught up the whole cast (chorus included), who if not so minutely engaged were yet present with remarkable collective focus.

And so, the glacial non-movement of Wilson's physical production seemed more sensible. Even the end, criticized at the time for showing neither Ortrud nor Elsa expiring, made some sense as we saw that live stage presence of Mattila's, amplified all evening in her physical labors, simply ebb away on hearing Lohengrin's account.

This was DeVol's Met debut, despite a long career (including Bayreuth) in the big Wagner parts. Her voice, despite any technical litany (to start: is it one voice, or fragments?), has to my ears all these fascinating and (at low-mid volume) beguiling textures in it. She makes much of them, and is an interesting complement to the clear-toned but similarly volatile Mattila; I'd much like to hear them paired elsewhere. Still I'm sure she'll be controversial, particularly to those listening for a certain sort of aural beauty.

But the evening was about something quite different, and any beauty-based review is, I think, serious misrepresentation. Even Levine fill-in Philippe Auguin's somewhat dry sound mattered less than his responsiveness, and the countless gradations of feeling he caught in characteristically objective style.

For those with senses to hear and see such things: go. (Before the cast implodes from stress.) The radio, I'm afraid, will be more misrepresentation. A telecast/DVD would be fantastic -- if last night's fairly traditional bunch can be roused, anyone can -- but I'm afraid the Met lacks money and DG lacks sense (they're still sitting on the "full Mattila" Salome).


UPDATE (2:30PM): The event draws bloggers forth in praise: Steve Smith, Jonathan at Wellsung (and more), Maury, and even the long-absent Sieglinde.
Posted by JSU at 6:45 AM