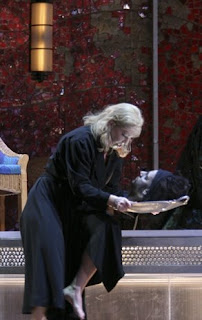 OK, I had my fun, but maybe a bit more about last night's Metropolitan Opera actual-season opening Salome is in order.

On the singers, I agree with Maury's post except I'm fairly sure he was there when I heard Bryn Terfel's Jokanaan. I knocked Ildikó Komlósi in the season preview, but she was dead on as Herodias, quite an improvement from 2004's surprisingly too-staid Larissa Diadkova.

On the conducting, Sieglinde's reaction is more or less my own: Mikko Franck couldn't have been worse than this, could he? Patrick Summers certainly isn't Gergiev (conductor of the production's 2004 debut), which on the one hand means no Putin-lionizing embarrassments but also means none of the creepy, febrile energy that saturated the original run.

Karita Mattila's 2004 opening night of this was an unforgettable ecstatic success, but comparisons are useless. Even over a plain orchestral backing, Mattila communicates Salome's perversity to full gross-out levels. Missing it might be more perverse.

UPDATE (5PM): Forgot to mention -- here or in the productions overview -- that I actually like Jürgen Flimm's staging of this Strauss opera. The evocative, cleanly-textured set is an effective base for the goings-on. The weakest part, I'd thought, was Doug Varone's choreography for the dance, but it (though seemingly unchanged) somehow sat better this year.
Posted by JSU at 4:02 PM