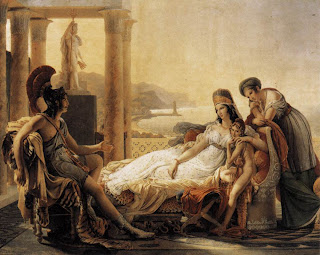 For all the significance that the genre and its institutions had in the 19th century opera world, French Grand Opera turned out to have only two enduring representatives: Don Carlos and Les Troyens, neither of which were particular successes at the time. (Troyens actually never got a full staging during the composer's life.) In fact each, while sticking to the formal requirements of the genre -- five acts, ballets, big crowd scenes with chorus, etc. -- transforms the characteristic aesthetic experience thereof wholesale. One understands why upon actually seeing the then-popular stuff, which one might call the Hollywood summer blockbusters of their day... if one were willing to be slightly unfair to summer blockbusters. Spectacle! Wish-fulfilment in and adoration of the hero! Climax upon climax! More spectacle! In place of these Verdi gives us his characteristic tragic drama -- with true feeling substituted everywhere for the genre's fake stuff -- and Berlioz, well...

Verdi's Don Carlo(s) characters are cursed by the moment, stuck passionately in unbearable stasis for most of the night. In Les Troyens it is time that is the destroyer, the onrush of which will -- as every half-educated viewer knows from a glimpse of the title -- unmake all the cities shown on stage. Why does Berlioz add and foreground Cassandra within Virgil's Book 2 telling of the sack of Troy? Because the outcome is too well-known, is buried under too many irrevocable pasts: Berlioz reaching back to his childhood reaching back to Virgil reaching back to Homer whose account of his already-distant past was the literal beginning of Western literature as such. Not only must Troy fall, but its fall is basically the most famous and significant secular event ever: every viewer must expect the end from the moment it appears, will react to the foolish joy and expectation of the crowd with the same despair and horror as only one who within the story impotently knows the future can express. (In Virgil it not offered in the present; the running commentary is by Aeneas himself who is spinning a tale-within-the-tale.)

And so the tenor-hero Aeneas appears, not wanting to change his personal and private world as Don Carlo(s) or others do, but instead happy before he's dislodged, in fact resisting the inexorable march of time and event across his city's life and his. He fights the intruders, preserves what he can (treasure, immediate family, and a contingent of Trojan men), and tries to make the best of the divine command that drags him onward to "Italie" -- that is, past the razing of his city and into the swirl of the future we know too well... for today we know that Rome, too, falls and becomes picturesque ruin.

He doesn't like it, of course. Neither, necessarily, did Berlioz, whose very first engagement with literature was, by his own account, with the Aenied's Book 4 -- the Dido story. And so after depicting, in its first two acts, the grand and horrible power of onrushing events -- broken only for long breaths of awe and despair and foreboding -- the opera finds its counter-theme: that first magical space of childhood imagination, Dido's court, fleshed out to unmatched fulness by the adult's genius and long engagement. Here Aeneas, his men, his viewers, and perhaps the composer himself find not only respite from fate's whirlwind (it is, after all, a storm that forces the Trojans to Libyan shores) but actual resistance thereto. Dido's Carthage is not, as with so many exotic operatic locales, a palpably ephemeral world born just for a two-hour life (like, say, Minnie's mining camp): doomed it is, but from the beginning it senses the tide of fate -- and opposes it, more and more determinedly, long past the point of reasonableness or decency or self-preservation... so that its defiance lives on, echoing long past the ruin of not only its queen and itself, but of the "eternal" empire it was abandoned to found.


*     *     *
What space does all this blindness, struggle, and agony shelter and nourish and pay for? It's an achieved tranquility almost unheard elsewhere in the operatic canon. The ceremony of the poem's Book 1 and the fevered tragic course of its Book 4 are rearranged by Berlioz and opened out into something like the ur-courtly space, where even the rhythmic impulse of the dances doesn't need to go anywhere in particular. This is, of course, a very French mode, one that appeared in its great courtly period with Lully and Rameau and would reappear in great glory in the late-Romantic Franco-Russian court ballets of Petipa -- and indeed the uncut, full-length Russian re-creations of the latter are about the only other place one can sample these gloriously unhurried flavors today. But in the 1850s this transplanted re-flowering was yet some time off, and with a Revolution and numerous forms of government lying in between, the self-confident courtly mode of the Sun King's time might have seemed as immensely far from Berlioz as Carthage itself.

And yet both live again, all the more interestingly colored by their tenuous temporary existence. Because we -- and the characters, and indeed the composer -- now know what must come next if the flow of time and event and "fate" resumes its normal course, the courtly suspension thereof in ceremony and ordered luxury takes on a simultaneously triumphant and melancholy character -- in fact reflected in the moods of those depicted! -- for as long as it lasts. Because it cannot last long (and, in a way, should not be at all), it might as well last forever -- or seem to. And so the great Act IV sequence of dances, Iopas' song, and the ensembles through the duet "Nuit d'ivresse" again&again tries to settle into this temporary time-defying infinity... and again&again succeeds, for the duration of the piece(s). That we are twice kicked back to the onrushing crisis by Dido's doubts and the echo of Narbal's worry only increases the determination and savor of the next attempt. At last, with the rapt final duet, all is settled... And then the god speaks.

An intermission later, Act V plays out the breaking of the spell -- as we know must happen -- again in stunning Gluck-derived tragic form. But it's the Act IV spell itself -- more civilized than Tristan's, more humane than later ballets' (it's really white act and court act delicately and unstably fused into one) -- that makes Les Troyens a unique and unmissable masterpiece.