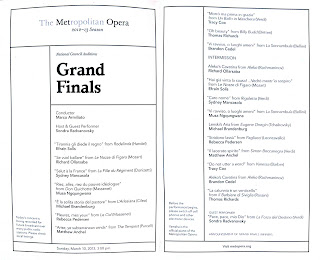 As last year, the program details are above. Instead of discussing the singers in order of appearance, though, I want to comment this time by voice type.

Sopranos:
Sydney Mancasola (25, California)
Rebecca Pedersen (21, Utah)
Tracy Cox (27, Texas)
Though these three were the only women in the finals, they represented their sex well. Mancasola, who's at AVA, gave two of the afternoon's best performances, really lively and fluent and in the moment and of course vocally impressive. The instrument itself has more body than I expected from what she picked to sing -- her role in Hoffmann was Antonia/Stella, not Olympia -- and though she has a easy top extension it's the ringing-the-huge-house size of her high notes that most impresses. Trill was faked in the Fille, but better as Gilda. Attractive, too: huge star potential here.
Pedersen actually had the hosts Eric Owens and Sondra Radvanovsky effusive while waiting for the judges: as they observed, it's sort of ridiculous that she sounds like this at 21. While still a sophomore at BYU, Pedersen -- who, by the way, looks better on stage than her headshot might suggest -- has some affiliation with Dolora Zajick's Institute for Young Dramatic Voices, and it's clear why. Her covered, vibrato-borne sound hasn't fully grown up, but already has a balance and a charge to it that can turn to bursts of agility at one moment and cutting through orchestral mass at the next. And incidentally, it may have been inadvertent but I liked that she stayed onstage to milk the well-deserved applause a bit: done within reason, there's a graciousness and grandeur in this that American sopranos sometimes miss.
Cox did really well with the Ballo bit, which emphasized her natural affinity for Verdi's line and rich, expressive middle voice. Her top is less pretty, though, and the Barber selection that was her second aria unfortunately played to this weakness more than her strengths.

Tenor:
Michael Brandenburg (26, Indiana)
The lone tenor was an audience favorite, and it's not hard to see why: his unabashed veristic phrasing made quite an impression. Unfortunately there was something in his basic production that I couldn't stand -- my anatomy isn't good enough to tell you exactly what was going on, but his vowel sounds were abominable. Perhaps this was due to indisposition, but if not, no thanks.

Baritone:
Efrain Solis (23, California)
Sang well and the basic sound was pleasant, but -- at least in a house of this scale -- he seemed to have to go all out all the time, restricting his range of sonic color to near-monochrome. (Not strained but unvarying.) Merola-bound.

Bass-baritones:
Richard Ollarsaba (25, Arizona)
Musa Ngqungwana (28, South Africa)
Brandon Cedel (25, Pennsylvania)
Thomas Richards (24, Minnesota)
I can't remember any similar pile-up of voices in this category before. The first three offered a sort of direct comparison -- Ollarsaba and Ngqungwana each sang one of Cedel's selections himself -- with interesting differences. Ollarsaba (about to start at Lyric's YAP) had (along with facial hair he really should shave off) a nice big framework of a voice, but the textures and colors haven't really filled out. If this happens, he has serious potential, but for now this limitation plays poorly with his otherwise interesting natural patience in phrasing (if he's not in a hurry, it should be more variedly interesting as he goes along... though the mood-shifts in the Figaro provided contrast for him in that piece).
Ngqungwana (another AVAer) was another audience favorite that I found unenjoyably flawed. He has an impressive loud sound, but temperamentally he's the opposite of Ollarsaba and just presses too much. This was destructive both musically (no legato or long phrases) and in the sound per se (an unpleasant pressure-induced vibrato particularly noticeable in parts of the Massenet).
Cedel, who was a George London winner last year, was the most satisfying of the three. His voice is just beautiful: musical, polished, with a full range of colors -- clearly, I thought, the male star instrument of the afternoon. And he uses its full resources so thoroughly and with apparent ease; his work in the Rachmaninoff actually brought to mind Peter Mattei's magnificent recent sounds as Amfortas.
Not competing in the same ground was Richards (also going to Merola). His voice is a bit limited compared to these others, but if Cedel offered impressive examples of the art of singing, only Richards brought -- with his use and understanding of word, story, and character -- the art of opera to its fullest appearance. His Claggart aria was great and moving, even if he couldn't dominate the orchestra at all turns. I doubt he'll ever lack for work in opera -- though whether he'll be a star at the international level is another matter.

Bass:
Matthew Anchel (25, New York)
He very much is, I think, who he is: precise, musical, with a precise & musical but not dominating instrument and presence. Perhaps he'll develop more star stuff as time goes by (remember when Furlanetto was a modest-voiced Mozart singer?), but in a strong year like this one it wasn't a bet the judges were likely to make.


*     *     *
I would have picked Mancasola, Pedersen, Cedel, and Richards as winners -- this year or any other year. All of them were in fact selected, but the judges -- four Met folks and the Pittsburgh Opera General Director -- also picked Brandenburg and Ngqungwana. (This left Mancasola twisting in the wind backstage for rather a long time, as she was called last in a competition where there aren't usually six winners -- and after the hosts had spent a while trying to pronounce Ngqungwana's name.) The Met absolutely loves loud and raw low-voice projects like Ngqungwana, whom I knew would be picked despite his issues... we'll see if they (or AVA) can, as they believe, refine his singing.

In other years, I think Ollarsaba or Cox or even Anchel might have had a shot. Anyway, I wouldn't be surprised if any of the finalists makes good. I'm definitely looking forward to hearing Mancasola and Cedel again... and seeing whom Pedersen becomes.
Posted by JSU at 10:00 PM