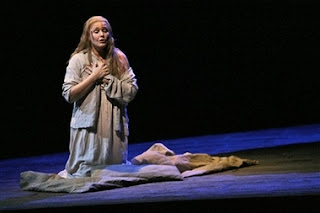 These both have changed, but at least as striking is the turnover in tenors. Jorma Silvasti (the current Laca) sings well and reveals details of character missing in Kim Begley's original version -- the mischievousness in Laca's first-act baiting and stalking of Jenufa is terrific -- but Begley's fearless power made the moral gravity of the man better stand out. Raymond Very, on the other hand, sounds good but misses some of the character of Steva, in particular the handsome-playboy manner that predecessor Christopher Ventris embodied well. On the whole, not an improvement, but later performances will have Begley back as Laca and Silvasti as Steva.

Anja Silja had been Kostelnicka when Karita Mattila and this production had been in London, and 2003's reviews tended to lament her absence. Meanwhile she has hit 71, and may finally be showing it: the top, while still forceful, has constant wobble and pitch issues, while the rest of the voice is barely audible over orchestra. (She showed solider voice just a year ago, in Erwartung.) Still, there's enough to do what she does, which is considerable. There is a clarity and audience focus to her acting that fits the clear white sound she's always had, and Silja is spellbinding from the Kostelnicka's upright walk on stage in the first act to her tortured mental turns of the last two.

I agreed, at the time, with reservations about Polaski -- her partnership with Mattila has often been a wierd hot-and-cold mismatch -- but Jurowski has long struck me as one of the best guest conductors, allowing and encouraging not only singers but the terrific Met Orchestra winds to phrase as they should. Still, many seem not to like him, and a somewhat less refined Jenufa can certainly work.

Presumably more authentic is Czech conductor Jiri Bělohlávek, and he definitely injects a certain full-blooded vitality to the sound of the current revival. In fact the orchestral climaxes are often terrific, with Belohlavek drawing bursts of the most glorious sound and energy. But his (perhaps intentionally) haphazard sense of coordination causes him to step on singers' phrases, spoiling some of the best character moments. Perhaps the cast will adapt by the end of the run, but this evening could have used a somewhat firmer hand at the wheel.

Finally, if audiences may be growing weary of Mattila doing reruns (though a look back shows the same "why aren't people going?" lament in 2003), she herself certainly isn't. On stage she is as energized as she's ever been, and in larger voice than ever.