Willy Decker's production of La Traviata, which finished its import run at the Met late in January, is perhaps most sympathetically understood as trolling, a conscious exploitation of a certain audience's boredom with opera and desire for more contemporarily gross sensations. Even its silliest feature -- the attempt to efface the piece's musical heart by gesturally talking over every key passage with distracting stage action -- can be seen as an attempt at the further provocational frisson, one long familiar to European directors and audiences. But let us take the show seriously for a moment.

Violetta, we are told in Decker's Playbill interview, is "the only person in the opera who truly loves" -- and this conceit drives the production's entire one-note character presentation. 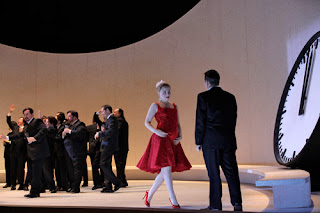 Not, mind you, that we're shown Violetta herself doing much loving: she spends most of her time staring at an ominously-seated Dr. Grenvil (the angel of death, here costumed as an old-Franz-Liszt lookalike). It's in fact the rest of the cast that's adjusted. Because the schema says they do not love, Decker does his best to dehumanize them altogether -- beginning with Flora and the partygoers, stripped of individuality and even of their sex by short slicked haircuts and masculine black suits. These are the Soulless Bad Guys, and when Alfredo puts away his horrific floral bathrobe to put his suit back on (the production's attempt, pant-zipping and all, to bury "O mio rimorso"), we know Decker's written him off. His father doesn't even get that chance, typecast from the first as a mustache-twirling gangster thug who derisively laughs off (literally) Violetta's revelation of the financial truth. If Germont eventually is allowed some bare semblance of civility with her, it's only to set him up for an even sillier brutality, as he knocks his son down with a blow to the face just before launching into his beautiful paean to Provence and family. (I suppose we might be slightly grateful that Gelb didn't hire somebody who would've had Germont try to hump or defecate on his son at this point.)

But Decker's brutalizing vision aims larger, and returns to Flora and the chorus for the most striking invention of the production. Act II's party scene begins with the crowd having lost not only their individuality of body and dress but their very faces, having gone now to paper caricature masks. The visage, upon close inspection, is meant as a parody of Violetta's (the overt story is of one of the pack putting on a red dress and taunting Alfredo), but the effect -- the felt danger -- of the scene is quite independent of this semi-obscure particular: their attempt, at the end, to put the bull mask on Alfredo while redoubling their abuse enacts the ultimate stage of mindless mob frenzy -- full-out sacrificial slaughter, here both animal (primitive ceremony) and human (lynching).

*     *     *
It is striking, but doubly misguided. In the first place, this frenzied climax takes up only the scene's introduction -- the gypsy/bullfighter entertainment Flora offers her guests. Of course it has nothing to do with either the actual tone and action of that intro nor the charming music Verdi wrote for it (used, as Film Forum-goers may recently have noticed, to serenade Don Fabrizio on his entrance to his summer place in Visconti's film of The Leopard)... but the real offense is that the excitement and frenzy make an anticlimax of the actual climax of the second Act (and the opera itself): Alfredo's public insult in flinging Violetta's money back at her, and the trio (with chorus) that follows. Even ramped up to extreme levels with his pushing her down on the big clock/roulette wheel and stuffing the money into her mouth, this one-man offense barely even registers after the crowd explosion of the intro. Decker has written Violetta out of the climax of her own opera.

The second problem is more general: La Traviata isn't an opera about the power of force, of violence -- it's an opera about the power of gentility. Violetta's problem isn't that she's surrounded by a pack of anonymous and violent frat boys -- her urbane/demimonde set is a picturesque distraction, not a threat. No, her problem is that the part of the world that recognizes love and virtue is too decorous to readmit her after she sold them out (however it may have happened) to live the high life -- and that the claims of this decorous part of the world can be held hand-in-hand with the utmost courtesy and sympathy towards Violetta personally. For she and Germont do have a meeting of minds and hearts -- as all Verdi fathers and daughters do -- but there's nothing the two can alter for themselves. Alfredo's sister still depends for her happiness on the all-too-fastidious opinion of others, people quietly ready to ruin her life with no uncouth blow-up scene of the sort Alfredo himself later delivers (to -- as one may notice -- universal disapproval) but by a simple and socially appropriate withdrawal of approval. And so Violetta takes up unhappiness, though at her death she finally (in the otherwise incomprehensible locket business) gains a sort of readmittance to the decorously ordered world...

Decker's absurd reduction gives no hint of this essential dimension. Like too many modernizing directors, he's in love with at least the theatrical effect of brutality and violence and rewrites things to that end. Why? If -- to return to the beginning -- I believed he were serious in presenting this view of existence, I'd just prefer he stick to more appropriate fare, modernist or proto-modernist operas actually about the force of force (e.g. Wozzeck or Tosca). But his colors are too black: he paints his brutal world and its denizens as grossly bad and empty (he contrives to stage Act III without any of the characters actually talking to each other) without shading, without the irony or even self-lacerating joy we see from true practitioners like Berg. (Germont cartoonishly abusing his son before singing his aria is risible, but unintentionally -- and deliberately self-ignorantly -- so.) Conversely Decker's presentation of love is pure bathos: a disgracefully ugly floral pattern covering bathrobes, ceiling, and sofas in Act II's first scene. So he contrives to knock the thing he spends all effort presenting and to exalt some vague opposite... This makes him, I think, either a troll of those too thrilled by the violent excitement to notice the contradictory subtext, or a panderer to those who see suit-wearing Wall Street yobs as appropriate catch-all villains -- that is, to the current version of the genteel class that Verdi was actually skewering in his opera. I don't know which possibility is more depressing as an explanation for Decker's positive critical reception.

*     *     *
Largely hidden by the production elements -- but accessible whenever one closed one's eyes -- was the extraordinary musical thread. Perhaps it was the absence/perversion of the alternate paths of expression, or perhaps just weeks of concentrated performance before sellout audiences, but by this point in the run Noseda, his three leads, and the wonderful Met Orchestra had reached a unity and sustained focus equal to any Verdi here in memory. It was a truly excellent and moving Traviata... for the ear.

So all kudos to these musicians, but Decker's nonsense is capable of ruining even their best work and that of Luisi, Dessay, Polenzani, and Hvorostovsky next season. I never thought I'd miss the inane dancing cows of Zeffirelli's version, but I do. Give the opera wide berth until a new staging arrives.
Posted by JSU at 2:15 AM