The dominant fact of last night's Roméo et Juliette production premiere was the pervasive nervous atmosphere. All involved -- the orchestra, the cast, and not least the audience -- seemed tight and unwillingly engaged in the evening. Was the performers' side tension more an effect or cause of Dessay's sudden cancellation? Did the cancellation throw off the audience, or was it the gala business beforehand? (Or, indeed, was it the one-intermission format that allowed no break before 9:45?)

The bad vibes didn't actually torpedo any singers. Ramón Vargas seemed to shrug them off best, but all sang and acted pretty well, including substitute Maureen O'Flynn (who in fact debuted in the same opera seven and a half years ago) and newcomers Stéphane Degout (Mercutio) and David Won (Grégorio). Dimitri Pittas, a Lindemann Program tenor, actually made a real impression as Tybalt.

They were helped by the 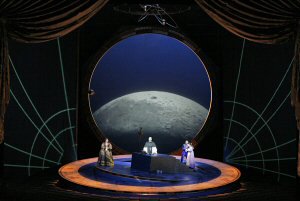 production, which if unspectacular is at least set up with plenty of reflective surfaces for the cast. Every scene is set around a two-circle setup that dominates the stage like a giant compact; various tall flat features appear on either side for scene changes. The center of the bottom circle tilts and rotates at key points, while the top opens up for nighttime scenes, showing what look like blown-up actual photographs of astronomical features (like the moon depicted in this mock-up picture from the official site). Costumes are a bit stuffy in a traditional sort of way; the families are nicely color-coded for easy identification. The duel scenes were very energetically choreographed and looked about as realistic as opera-stage knife-fighting is likely to be, but other mass scenes were dull and relatively static.

The one visual coup of the night was for Act IV: the lovers appear suspended in a spotlit white bed above the star-strewn floor, before the star-filled rear circle. This worked well, but perhaps repeated last season's Gounod love-duet trick, also -- as I recall -- involving stars all over. We get it, we get it. Ah, for the spare poetry of Carsen's Onegin (and its nighttime letter-scene climax)...

*     *     *
That said, there was a whole lot of sniffling at opera's end. If the chemistry of the run changes -- which wouldn't be a huge surprise, esp. if Dessay makes it back -- this could still be a considerable success. I'm very curious as to what Thursday's second night will offer.
Posted by JSU at 3:13 PM