The sound of death 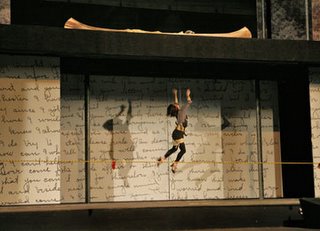 press coverage for Friday's world premiere (link goes to the official site, whence comes the picture at right) begins, with Verena Dobnik's long AP piece. She offers, among other things, this tidbit:

Days before the world premiere of one of the most anticipated works of the Metropolitan Opera season, composer Tobias Picker still hadn't decided how to end "An American Tragedy."

Zajick sings the last words to her son, by librettist Gene Scheer - "The mercy of God is equal to all sin" - in her chocolate-rich, powerhouse voice, heard as the door of the execution chamber is shutting and Clyde welcomes Jesus and is "saved."

Death could come with a bang or a whimper. The note C, for Clyde, could be played in unison by every instrument in the orchestra for 30 seconds, growing and climaxing in an ear-shattering last sound. Or it could be played in the softest short "plunk" in a minor key. Or maybe three "plunks."

"The unison is open, with no harmony. It leaves the questions about life open, with no real answers," said Picker, who was leaning toward that ending. Preferred by conductor James Conlon, "the three plunks are more of a statement, like the Holy Trinity."

Which music announces his execution will be heard on opening night.

I assume, however, that we won't be at a loss to figure out what happened.

Another interesting curtain-raiser by Willa Conrad of the Star-Ledger is mostly about Picker, who's apparently thought about his Met debut:

Levine approached Picker around the time of "Emmeline's" premiere in 1996 in Santa Fe; he consciously delayed the commission to give himself time to write a few more operas first. "Originally, Jimmy (Levine) wanted it for 2001, but I asked if they could wait because I wanted more experience," Picker says.Now he feels confident the opera was worth the wait. "I wouldn't say I understand my role differently," Picker says of the process of creating an opera, "but I feel that I have grown into it, and earned my role as composer."

Meanwhile, NBC's Today Show will apparently air a segment Friday morning about the opera's premiere and the murder that inspired it.
Posted by JSU at 2:40 PM