In one sense, Puccini's La Boheme is the easiest of operas to appreciate, as any glance around the newcomer-filled auditorium during any Met run could tell you. In another, it's the most difficult -- particularly for the otherwise more culturally sensitive. Perhaps the opera is the victim of its own success: isn't it too much, this haze of sentimentalizing around the piece, the subsequent part-Romantic/mostly-pop hallowing of bohemia as the place -- too often cozily, shorn of the opera's tragic narrative for comfortable wish-fulfillment consumption at all hours -- not to mention the generations of self-satisfied imitators (and worse) in its cultural wake? And if the material's too much Puccini himself (of course) pulls no punches -- tune after glorious tune, delineating emotions of life and death, within a symphonic texture and organization that's almost too well-crafted to believe; nor does Zeffirelli's masterpiece of a production, the lazy knocking of which seems obligatory for any critic wishing to polish his or her credentials. And the singers! Who can deny some impulse to write off the piece as poor taste or overripe or opium for the bourgeois striving if and to the extent these ostensible free spirits turn out not just to be clods, but monochromatic clods visibly intent on high notes or strutting or general self-aggrandizement?

Yet the piece endures, surviving poor renditions and condescension alike. Year after year audiences are transfixed by the bohemians as -- because! -- love and death knock, together in the person of a cold-handed sun-besotted girl, on Rodolfo's door. And sometimes...

As last spring's revival brought the sonic scope and cohesiveness of Puccini's score again undimmed to the ear, this current run shows how well the piece can work as musical drama on stage. Puccini's sonic inspirations seem here effortlessly incarnated as human-dramatic ones by the singers, without a bit of insincerity or routine or look-at-me grandstanding. If hype and publicity can detract from La Boheme's honest appeal, it may be fitting that the finest overall cast the piece has seen here in two decades or more is appearing without much of either. 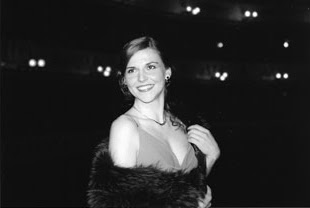 Twenty-nine-year-old Maija Kovalevska has grown since she, fresh off of winning that year's Operalia, debuted at the Met as Mimi two years ago. As her February Micaëla suggested, what was then promise has blossomed into something remarkable. In the first place, her voice is about a size and a half louder these days -- not from any sort of forcing, but simply louder and more audible by maturation. It means not just that she can be heard, but that a larger range of shades and effects is open for her lyric soprano's audible use. The colors of darkness and twilight in its timbre have thus multiplied, but also the more ringing clarity (particularly on top) on which she sometimes calls.

The Mimi she builds with these is spellbinding: fresh and tranquil, but achingly heartfelt; imaginative, not bland; and with a palpable Italianata that nevertheless keeps her inside this lyrical, unaffected character. In Mimi's great solos and ensembles one recognizes the remarkable thing one hears in Kovalevska's current teacher Mirella Freni and other great predecessors -- most strongly, I think, in Met legend Lucrezia Bori, who sang the part some seventy-odd times with the company: the character's refined peace is transformed at climaxes, unforcedly opening out inside some few notes with the infinite colors of some never-before-sensed dimension. So we are privileged to hear -- first when she mentions the April sun's first kiss and the scent of her rose and then again repeatedly later -- the vast joys she feels within the bounds of her small room and life, the immeasurable inner space in which -- as she says, before the end -- she loves Rodolfo as deeply and infinitely as the sea.

It is the sort of success that sets the opera alight, has grown New Yorkers reaching for their handkerchiefs through Acts III and IV, and rehabilitates Puccini even for the most doubtful -- but I wonder if the lack of visible (her acting, aside from some well-placed attention given to falling and cough spasms, is pretty transparent) or audible showiness will keep Kovalevska from getting the plaudits she deserves. In a sense, it doesn't matter, because the company believes in her and is bringing her back again and again, but... We'll see.

The other soprano, Susanna Phillips, also won the Operalia competition -- in 2005, the year before Kovalevska -- and was a Met Council Finals winner that year to boot. But she is younger (now 26 or 27, I'm not sure) and Monday's first night of this revival was in fact her Met debut. In 2005 she sounded like a major voice, and apparently Phillips hasn't taken many vocal wrong turns since: in easy-sounding control and production, radiant clear sound all the way up and down, and whatever else you might want, her voice still stands out. In manner she's still the open, naturally musical, and naturally charismatic singer we saw at the competition, as comfortable commanding Musetta's large share of attention onstage as holding and elaborating the high-note climaxes of her famous waltz. Her Musetta's a fairly generous and spirited one, more ditz than shrew in her changeability. Word (not yet reflected on Brad Wilber's compilation) is that she's to sing Pamina next season, but some future Manon could be irresistible.

The men are familiar, and good. Ramon Vargas was fighting through some difficulty on top, but he delivered as necessary. As last time he sings with grace and all the expressive urgency of his recent form, and inhabits the part earnestly and seamlessly. Mariusz Kwiecien, Tommi Hakala (last, I think, seen debuting in Faust two years back), and Oren Gradus do well in the other bohemian roles, sharing a certain pleasant leanness of spirit and voice that suits the bunch.

*     *     *
Conductor Frédéric Chaslin doesn't exactly get in the way, but his isn't the complete conception that Nicola Luisotti brought to the pit last season. Chaslin does well with both the expansively detailed orchestral tapestry and the big lyric currents, but under his baton the two elements don't ideally coexist, each coming out by stepping on the other in turn. So each moment is well handled, but the Acts don't add up as well in sound as they might.

Such coherence may improve with repetition, but even if it doesn't this is a great and irresistible revival. Note that Vargas is only singing through the January 3 matinee broadcast: the subsequent two performances will feature Massimo Giordano as Rodolfo. Unlike Vargas, Giordano actually is a clod, but his cloddishness was actually turned to unexpected advantage in the season's earlier Traviata. Again, we'll see.
Posted by JSU at 6:48 PM