Class is not today one of the more salient factors in American life, but in New York*? -- that's another story. Class awareness and envy is a popular local bloodsport, which fact colors not only local media (New York magazine is the most prominent of those pretty much entirely dedicated to scratching this itch) but national press coverage (which takes its cues from the Times and other locals).

[* Or, indeed, Massachusetts, as the opera may remind.]

Now to a local Met audience -- particularly on a gala night, as Friday's -- what happens elsewhere doesn't matter anyway. Gene Scheer and Tobias Picker's An American Tragedy is, whatever else, the intricate refraction of local concerns that The Great Gatsby entirely failed to become under John Harbison's unfocused eye. (None but Wagner should be his own librettist, and even he could have used a good editor.) For success in that alone the Met may count the venture good. Many in attendance, too.

Of course, there's more to it than that. Clyde Griffiths isn't felled by class conflict, after all, nor even by the consumer hunger (the opera gives Clyde this aria soon after arriving in Lycurgus) that pushes him into it. It's a more universal aspect of his charmingly unbanked desire* that brings him to ruin: love, or lust. In this it follows the novel's famous movie adaptation, A Place in the Sun, perhaps more closely than one might have expected. As in that version, Clyde's desire for worldly advancement is embodied -- maybe even subsumed -- by his desire for the alluring, possibility-intoxicated Sondra Finchley, who as perfectly written for Susan Graham (think of her Hahn album, not Octavian) becomes a fairly understandable motive for unfaithfulness. But this, too -- like Clyde's seduction and abandonment of the less colorful Roberta Alden -- is a familiar local story as much as a universal one.

[* Perhaps learned from his parents, who did love God immoderately.]

*     *     *
The first act -- there are two, each about an hour and a quarter -- rushes forward breathlessly; the second builds, with much contemplative breath at the beginning, to a gripping dramatic climax (and a lone plunk). The seamless scene-to-scene 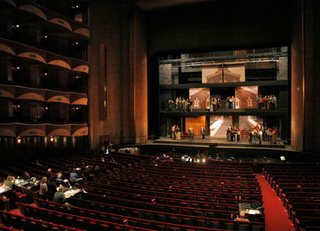 changes of each are enabled by Adrianne Lobel's excellent three-tiered set design, with two levels for action (some simultaneous in two times or places) and the top for complementary scenery. Painted panels slide across the three levels, and combine with occasional solid slide-on set elements to form a great range of stage images. It's a production that takes good advantage of the Met's size and stage apparatus, and might be tricky to put on elsewhere.

In a sense the drama recapitulates -- as do its somewhat greater forerunners -- the story of its creators' civilization. Act I, moving ceaselessly forward from scene to ever-shifting scene, is entirely Clyde's -- which is to say desire's. Its unbanked force within him, manifesting in characteristically American form (as above), conquers what's before it, triggering and feeding from desires of those around him. So Clyde gets his job, then his woman, then his social entree, while Roberta finds love and Sondra -- who has discovered desire herself in New York (not least, of course, through its consumer opportunities!) -- a playmate and co-dreamer.

These, naturally, can't all coexist -- a far more fundamental problem for Clyde (and society) than the mean-but-incidental snobbery of his cousin or aunt. Act I closes with his idyll of ever-newly-satisfied desires being fatally cracked, as Roberta tells him she is pregnant.

But Clyde doesn't follow the rules that would have him resolve these conflicting desires at the point where their conflict has been unmistakably spotlit. This begins Act II's crime-and-punishment structure. He lets things fester, delusionally (or sociopathically) believing that he can still have everything, notwithstanding others' claims. Against this belief every society must defend itself (as also here), not least because it moves some to kill. For Clyde it's a letting-die, though the legal machinery by which peace in America is kept -- even against the strong sexual and economic passions of the country, this incubator of Act I's desire -- finds him a murderer. Whatever the niceties, Clyde's personal case resolves when he acknowledges to his mother that his inner guilt matches the outer. The transgression that began the act thus ends.

*     *     *
Of Picker's music one might make many complaints fair and unfair, but we should first start with this: it well suits the text and performers of the piece. Picker, at the least, well and correctly judged the dramatic arc of the story and the vocal/character possibilities of the people who were to embody it. Beyond that, my initial general impression was that none of it is boring, but too much of it falls into the slow-rapt and fast-ominous dichotomy that's been too common for too long. (What I miss most in new operas is the cabaletta.)

One might joke about the music being set in 1906, as well as the story -- Picker seems to look more to Janáček than to any critically-approved living composer -- but my main thought at the end was: good, now commission from them another one.

More on this, perhaps, after more hearings.

*     *     *
Finally, no one familiar with singing today should be surprised that the two star-quality instruments in the production are both mezzos, and that they walk away with the performance side of the show. Susan Graham and Dolora Zajick's considerable vocal and temperamental talents are shown off very, very well by their parts. Patricia Racette provides blood aplenty to the veins of Roberta, but -- as hinted above -- not a lot of extra color to her character. (It would take a Lucrezia Bori to add that.) In the lead, Nathan Gunn embodies Clyde Griffiths well but, on opening night at least, lacked the vocal punch for effective sonic climaxes. The others -- Jennifer Larmore (the aunt), Kim Begley (the uncle), William Burden (the cousin), Jennifer Aylmer (the other cousin), Richard Bernstein (the prosecutor), and Anna Christy (the chambermaid) -- sing and act well in smaller roles, as does boy soprano Graham Phillips as the young Clyde. James Conlon conducted admirably, but without the forward-rushing abandon that some of the quicker passages seemed to require. Perhaps the orchestra's further familiarity with the score will allow that?
Posted by JSU at 7:00 AM