From some of the principals of tonight's world premiere at the Met...

"One would think that a librettist's job is to write the words that will be sung. And at one level, of course, that is certainly what one does. But the truth is that the most important task a librettist has is to create moments that demand to be sung. The words clearly matter, but crafting what is happening in each moment is what makes an opera 'sing,' both literally and figuratively."

Picker has filled his work with lyrical arias and ensemble set pieces, and there is little or no recitative. An American Tragedy, as the composer describes it, is carried forward in an "arioso style." [...] "I think that there's an American flavor to the musical language in this piece," says Picker, who has included an actual hymn from the 1880s ("'Tis so sweet to trust in Jesus") as well as one of his own composition in the big church scene in Act 2. "I hope there is a directness to the music and a simplicity-when it needs to be simple the music is not afraid to be so. When the situation or the emotional moment requires complexity, the music is more dense. My music has a straight forwardness about it. It is clear and direct, like Americans are."

"The more I know the character through the music and the libretto, the more embarrassing I find Clyde. This is not because he's ignorant of certain social subtleties. He has an earthiness that is very primitive, very powerful." 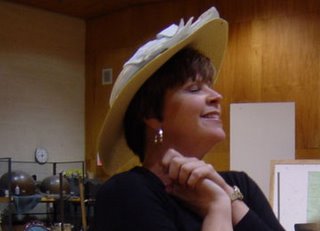 "She's young. She should convey a sort of knowing naïveté. She's early-twentieth-century. She's a strong girl, full of complex social influences, and quite ahead of her time. She has a sexual foray, cares about Clyde yet doesn't show her face at the trial. Still, she sends him that final letter." Graham sees parallels between An American Tragedy and another genuine news story, the recent case involving Scott Peterson and the drowning of his pregnant wife. "But," she qualifies, "I'm not playing Amber Frey."