She performs with the widened sonic and gestural vocabulary of a master, though she isn't one yet. She has every note from bottom to top, and a not-bad trill. She is beautiful, and has a good sense of what she should be doing at any particular moment onstage. 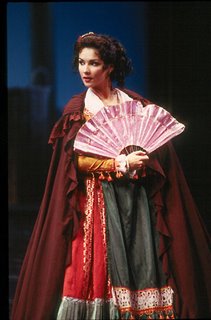 So who am I to complain that Anna Netrebko's voice is not now the glowing silver peal of 1998 (the year depicted at right), nor even the (darker) burnished steel of 2002? Someone who heard and liked those incarnations, I guess. Today the sound is remarkably large for her type, still clear, and easily produced, but no longer has the immediate sensual allure of years past. In fact she's starting to sound like another east-Euro beauty -- Angela Gheorghiu (a younger one, anyway, with an easier top) -- which makes some sense since their roles are beginning to converge. Perhaps their stardom already has.

By contrast Rolando Villazón's basic sound may be his strongest asset: the quick vibrato makes much more sound urgent, heartfelt. But his slim good looks and youthful bounding and phrasing help, and it's topped off by remarkable and effortless-seeming resources of breath. The voice is really expansive in the middle, but ordinary on top -- sort of a mini-dramatic's instrument.

The last act of Saturday's season-first Met Rigoletto showcased both the ups and downs of Villazón's sonic endowment. "La donna è mobile" made little impression, brought down by dull high notes and an uncharacteristic bout of chronic flatting. But the quartet, with Villazón spinning easy, ardent, never-ending phrases -- that was something.

His Duke is a youth, not a man: confident but quick-moving, impulsive, jumping from one thing to another (and, unfortunately, chopping phrases in the process), his fatal callousness more adolescent self-regard than narcissism or sociopathy. Phrase-chopping aside, I suppose it's a reasonable take. Surely it's not much Villazón's fault that I found myself craving another tenor's stage persona in the part...

The title part was sung well -- if neither overpoweringly nor with much mad frenzy -- by Carlo Guelfi. But the real protagonist of the night was conductor Asher Fisch. He (almost as well as Robert Heger in my favorite Rigoletto recording) liberates all the forward rhythms of the opera, midwifing an exhilarating Verdian performance that certainly won't happen under the worst conductor in Met history. Eric Halfvarson is strong, while Nancy Fabiola Herrera, though irritatingly behind the beat for the night's quartet, has a nice rounded sound. With Fisch's guidance and no weak links in the cast, Rigoletto is a success... even if not ideal.


UPDATE (11:55 AM): Alex's review at Wellsung reminds me of one thing I omitted -- the excellent work of the chorus. They, James Courtney as Monterone, and the other bit-player courtiers made the opening scene really riveting. The Met Orchestra's excellence should go without saying.
Posted by JSU at 2:22 AM